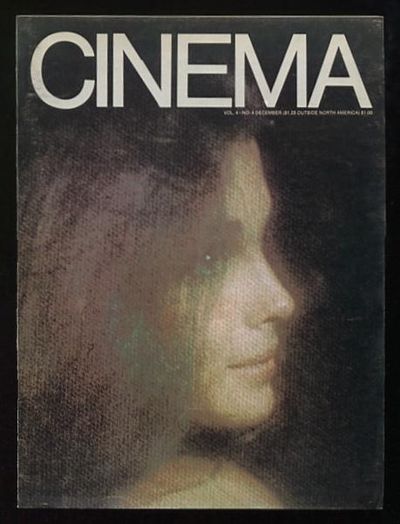 by (Lindsay, Michael, ed.)
Beverly Hills CA: Spectator International. Near Fine. 1968. (Vol. 4, No. 4). Magazine. [nice clean copy, light external wear, a few horizontal stress lines along spine]. The contents of this issue, which includes a restatement of the magazine's editorial purpose (it was the first under Michael Lindsay's editorship), are eclectic to say the least, and include: "Billboards, Beards and Beads" (an article about Michelangelo Antonioni and ZABRISKIE POINT); an interview with TV director John Moxey; an article about Budd Boetticher and the making of ARRUZA; an interview with actor Eddie Constantine; a review of DAVID HOLTZMAN'S DIARY (Jim McBride); "Animation, Pixilation and Mr. D'Avino" (Carmen D'Avino, a New York-based filmmaker); an article about Hungarian films; reviews of THE LION IN WINTER (Anthony Harvey), GIRL ON THE MOTORCYCLE (Jack Cardiff), PIERROT LE FOU (Jean-Luc Godard), HEAD (Bob Rafelson, with The Monkees) and THE BROTHERHOOD (Martin Ritt), and other films -- including THE ARCH, a now-forgotten Taiwanese feature that I wouldn't even mention except for the fact that the review is by a "Henry Miller" -- THE Henry Miller, though? I dunno. There is also a two-page reproduction of original sheet music for the 1927 Tom Mix feature THE ARIZONA WILDCAT. The artsy-fartsy cover photos (interior and exterior) are by John Derek, and feature Airion Fromer [typo'd as "Frommer"] and Dino Martin Jr.; they are part of an promo for Derek's film A BOY....A GIRL. [We have numerous issues of this and other film-related periodicals that are not listed online; please inquire if you have particular needs or wants.] . (Inventory #: 26299)
$35.00 add to cart Available from ReadInk
Share this item
ReadInk
Offered by