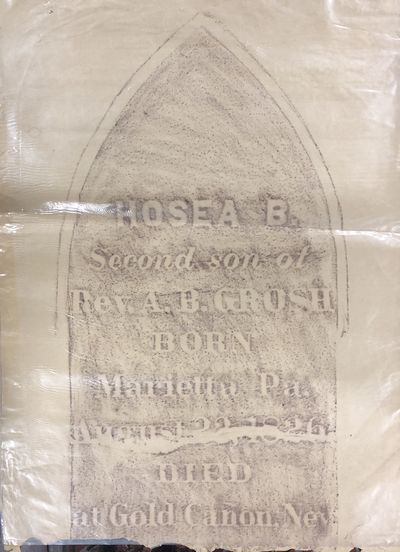 Good. Set of 7 gravestone rubbings from the cemetery in Silver City, Nevada. Death dates range from 1894 to 1909. Sheets measure approximately 20" x 36" and rubbings were done in red and brown. Overall good with heavy chipping to edges, moderate dampstaining, and minor to moderate loss to a few sheets. Silver City, Nevada was known for milling Comstock Ore and as a teamster center. Two locations mentioned on the gravestones include Gold Hill and Gold Canon, Nevada. Gold Canon refers to the area in Dayton, Nevada which is considered Nevada's first gold discovery. A few of the gravestones read: "Miss Isabel Dingle. Born May 20, 1889. Died June 10, 1907. Native of Gold Hill." "Here Rests a Woodman of the World - Clinton B. Biggs. Died July 16, 1909. Aged 23 years, 9 months." Woodmen of the World was a fraternal benefit organization, the purpose of which was to make life insurance affordable to everyone; their policies also included a headstone. Most of these headstones were carved out of tree stumps and sported the motto Dum Tacet Clamet ("Though silent he speaks" and the phrase "Here Rests a Woodman of the World." "Albert J. Williams. Died April 29, 1898. Aged 57 Years." "Hosea B., second son of Rev. A. B. Grosh. Born Marietta, PA August 23(?) 1826. Died at Gold Canon, Nev." The Grosch family (here spelled Grosh), were founders of Silver City. A unique set of mining related material. . (Inventory #: 022119)
$225.00 add to cart Available from
Back of Beyond Books
Share this item