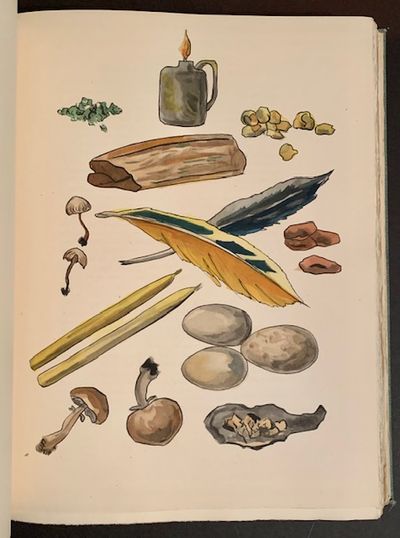 by Valentina Pavlovna Wasson and R. Gordon Wasson
New York: Pantheon Books, 1957. Cloth. Near Fine. The very uncommon 1957 1st (and only) edition of this soaring achievement in both the literature of mycology and the literature of hallucinogens. Vol. II only, which clearly is complete unto itself. A gorgeous copy to boot. Tight and Near Fine in its green cloth, with 1 tiny spot at the rear panel. Immaculate gilt-titled spine label, top-edge gilt, deckled fore and bottom-edges. Internally, all-but-pristine, with no writing or markings of any kind. 46 magnificent full-page plates, all with their original printed tissue-guards, all in beautiful condition. Most of the full-page plates are in sumptuous color, the rest are either etchings or very interesting collotypes. Also complementing Wasson's narrative are 17 "illustrations in the text". This is #462 of only 512 sets published. "The book was designed by Hans Mardersteig. The text was printed by the Stamperia Valdonega, Verona. The illustrations in color and collotype were executed by Daniel Jacomet, Paris, and by Fratelli Alinari, Florence. The paper was made by hand by Fratelli Magnani, Pescia, and the binding is the work of Torriani & C., Milan. The printing was finished in January 1957" (from the limitation page). Among the chapters and sub-chapters are "Teo-Nanacatl: the Sacred Mushrooms of the Nahua"; "The Divine Mushroom: Archeological Clues in the Valley of Mexico"; "The Anatomy of Mycophobia"; "Mushrooms in Tolstoy's 'Anna Karenina'"; "Aksakov's 'Remarks and Observations of a Mushroom Hunter'"; "Hallucinogenic Mushrooms: Early Mexican Sources"; and "Index of Fungal Metaphors and Semantic Associations". Also includes the fold-out chart "Mushroom Stones of Middle America", which is housed in a pocket at the rear pastedown. Gordon Wasson's magnum opus, a monumental study in hallucinogenic mushrooms, focusing largely in this volume on the ethnobotany and divinities of Mexico. (Inventory #: 18741)
$4,500.00 add to cart or Buy Direct from Appledore Books
Share this item
Appledore Books
Offered by