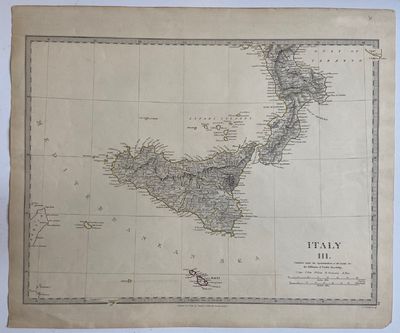 by SDUK (Society for the Diffusion of Useful Knowledge)
London: Baldwin & Craddock, 1830. unbound. W. B. Clarke. Map. Engraving with hand coloring. 13.5 x 16.25". This map centers on the island of Sicily, and includes the lower part of the Italian peninsula, as well as the Lipari Islands, Pantellaria, and Malta. The map is highly detailed, with cities, towns, rivers, and topographical features labeled. Mountains are depicted by hachure, and political boundaries are hand colored. The Society for the Diffusion of Useful Knowledge was formed in 1826 and published low cost maps with the goal of reaching a large market, while still maintaining high quality and precision. (Inventory #: 298446)
$100.00 add to cart or Buy Direct from
Argosy Book Store
Share this item

Map of the Military Department of New Mexico