Camilla: Or, A Picture Of Youth 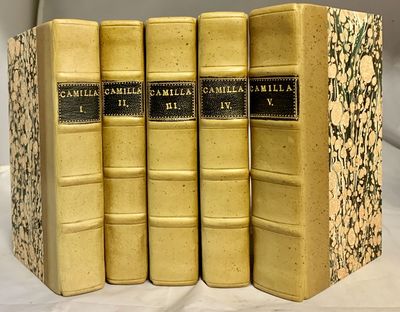 by Burney, Fanny (Madame D'Arblay)
London: T. Payne and T. Cadell, 1796. First edition. Hardcover. Bound in quarter light brown calf and marbled boards. Near fine. 5 vols. xlviii 390 (4), 432 (4), 468 (4), 432 (4), 556 pages. 7 x 4 inches. List of subscribers, and six page manuscript review of the title: "Characters of the Principal Persons," in the first volume, the latter trimmed at fore-edge with some loss. Burney's third novel. Signature of James Lake to title of first volume, likely the author of the manuscript review, and likely the husband of the "Lady Lake noted in the Subscriber List. Among the subscriber list, a host of leading society and dignitaries, including fellow women writer's -- Anne Radcliffe, Hannah More, Maria Edgeworth and Jane Austen (then an unknown 20 year old, and thought to be the first time her name appears in print). T.B. Macauley in the Edinburgh Review noted, "Miss Burney did for the English novel what Jeremy Collier did for the English drama. She showed that a tale might be written in which both the fashionable and the vulgar life of London might be exhibited with great force, and with broad comic humor...." Contents clean overall with occasional light toning. (Inventory #: 22506)
$985.00 add to cart or Buy Direct from
Roy Young Bookseller
Share this item
Roy Young Bookseller, Inc.
Offered by