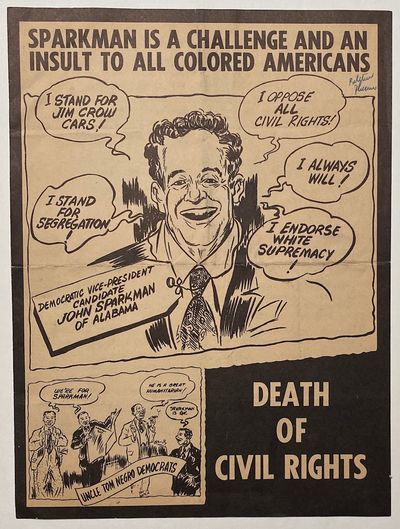 n.p.: Citizens Committee for Eisenhower, 1952. Four-panel brochure, 8.5x11 inches, neatly fold-creased, evenly toned else very good condition. An attack on "Uncle Tom Negro Democrats" who "stood silent, mute and trembling" as the Democratic presidential candidate, Adlai Stevenson, chose the "red-necked" Alabama segregationist John Sparkman as his vice presidential candidate in an effort to cater to Dixiecrats. Includes quotes from Sparkman opposing civil rights. "Don't stomach Sparkman! Denounce the insult! Accept the challenge! Vote Republican this time! Remember, under the election laws, you cannot vote for Stevenson without giving a vote to Sparkman. The only way to make sure that Sparkman can never be President of the United States is to vote for Eisenhower and Nixon on November 4, 1952. (Inventory #: 259168)
$75.00 add to cart or Buy Direct from Bolerium Books
Share this item