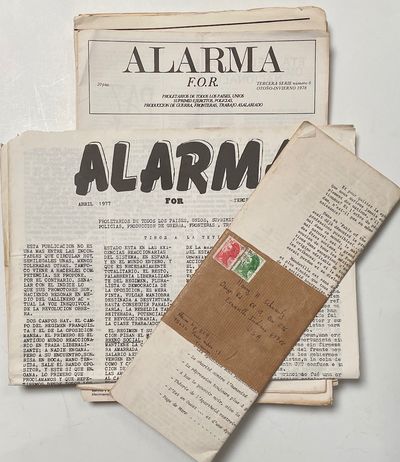 by Fomento Obrero Revolucionario
Paris: F.O.R., 1985. Ten issues of the bulletin of the Spanish Trotskyist group led in exile by Grandizo Munis; various formats, generally a bit worn and grungy, some with more substantial wear or discoloration. Issues present are 1, 6-11, 17, 24, and 29. OCLC says "A partir d'agost 1977 es publica a Barcelona," but these issues continue to give the Paris address, and the last issue present is still in its original mailing wrapper with French stamps. It's possible that a bulletin of the same title was issued in Barcelona by the small group of Munis' followers there, most of whom were purged in the early 1980s. (Inventory #: 259187)
$75.00 add to cart or Buy Direct from Bolerium Books
Share this item