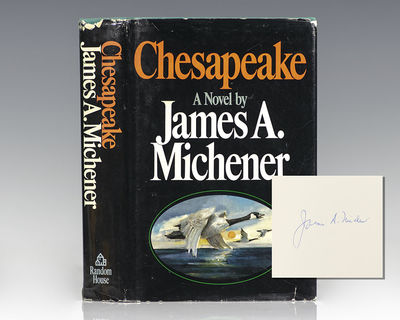 by Michener, James A
New York: 1978, 1978. First edition of this classic story which deals with several families living in the Chesapeake Bay area around Virginia and Maryland, from 1583 to 1978. Octavo, original cloth, cartographic endpapers. Boldly signed by James A. Michener on the page preceding the half-title page. Near fine in a very good dust jacket. Jacket design by R. Adelson. In this classic novel, James A. Michener brings his grand epic tradition to bear on the four-hundred-year saga of America's Eastern Shore, from its Native American roots to the modern age. In the early 1600s, young Edmund Steed is desperate to escape religious persecution in England. After joining Captain John Smith on a harrowing journey across the Atlantic, Steed makes a life for himself in the New World, establishing a remarkable dynasty that parallels the emergence of America. Through the extraordinary tale of one man's dream, Michener tells intertwining stories of family and national heritage, introducing us along the way to Quakers, pirates, planters, slaves, abolitionists, and notorious politicians, all making their way through American history in the common pursuit of freedom. "[A] marvelous panorama of history seen in the lives of symbolic people of the ages . . . an emotionally and intellectually appealing book" (The Atlanta Journal-Constitution). (Inventory #: 120639)
$175.00 add to cart or Buy Direct from
Raptis Rare Books
Share this item