The Life and Adventures of Nicholas Nickleby. 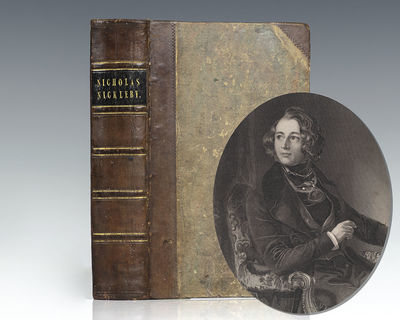 by Dickens. Charles
London: Chapman and Hall, 1839. First edition in book form of one of Dickens' most popular novels. Octavo, bound in contemporary three quarters calf, morocco spine label, gilt titles to the spine, raised bands, steel-engraved frontispiece portrait of Dickens after the painting by David Maclise, illustrated with 39 etchings by Hablot Knight Browne ("Phiz"). In very good condition. "It was the novelist's intention to expose in this story the terrible abuses practiced in the cheap boarding-schools of Yorkshire, and, in order that he realize their true character, he determined to investigate for himself the real facts as to the condition of those notorious seminaries, Accordingly, at the end of January 1838, he and 'Phiz' started on this memorable journey, in bitterly cold weather, and, visiting several schools in the locality, they came into direct contact with the proprietors. One of these was William Shaw, the identical schoolmaster who, some years previously, had been heavily fined for what was represented at the trial as gross maltreatment of his pupils" (Kitton, Dickens and His Illustrators, 75). The plot, the characters, the dialogue, everything about Nicholas Nickleby "has the feel of theatre; it is as if Dickens saw human life conducted among lights of the stage, making it somehow larger and brighter than the reality" (Ackroyd, 283). (Inventory #: 120414)
$1,100.00 add to cart or Buy Direct from
Raptis Rare Books
Share this item