Hunting with Hemingway: Based on the Stories of Leicester Hemingway. 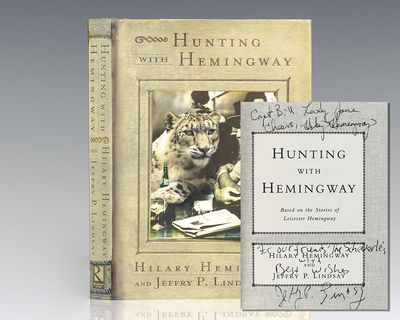 by Hemingway, Hilary and Jeffrey P. Lindsay
New York: Riverhead Books, 2000. First edition of this work which carries the "Hemingway traditions of hunting, family, and storytelling into the new millennium" (Kirkus). Octavo, original half cloth, pictorial endpapers. Inscribed by both authors on the title page. Fine in a fine dust jacket. Fifteen years after her father's death, Hilary Hemingway receives a curious inheritance: an audio-cassette of Les, her father, telling outrageous stories about hunting with his famous older brother, Ernest Hemingway. Les clearly aims to amuse the listeners with tales of the Hemingway brothers hunting vicious ostriches, hungry crocodiles, and deadly komodo dragons, but where Les Hemingway gets serious is in defending and explaining his brother's reputation to a contemptuous Hemingway scholar. Hilary transcribes these stories, revealing the bond between two larger-than-life brothers-and tells of her own quest to make peace with the painful parts of the Hemingway legacy. (Inventory #: 118379)
$125.00 add to cart or Buy Direct from
Raptis Rare Books
Share this item