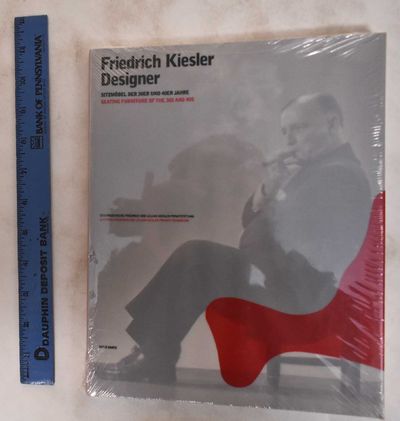 by Pessler, Monika and Harald Krejci
Ostfildern, Germany: Hatje Cantz, 2005. Softcover. New/Sealed In Publisher's Wrap.. black and white pictorial & pink wrappers w/ red & black printing. 128 pgs w/ bw & color illustrations. Text in German and English. Previously unpublished material relating to Austro-American artist/architect Friedrich Kiesler's (1890-1965) innovative furniture designs and prototypes from the 1930s and 40s are showcased in this comprehensive volume. Also included are letters, diary entries and photographs that chronicle the New York cultural environment in which Kiesler lived and worked, and provide rarely documented insight into the role he played in the contemporary design scene. Shortly after emigrating to New York in 1925, Kiesler became an important mediator between European and American positions in the fields of design and architecture. In the following years, he designed furniture and exhibitions, and articulated the fundamental principles of a critical theory of functional architecture and design. Concepts that are being thoughtfully revisited by today's designers--flexibility, dynamism and multifunctionality--were constant elements in Kiesler's theoretical constructs, as evidenced in this volume.--Amazon. (Inventory #: 181341)
$35.00 add to cart or Buy Direct from Mullen Books
Share this item