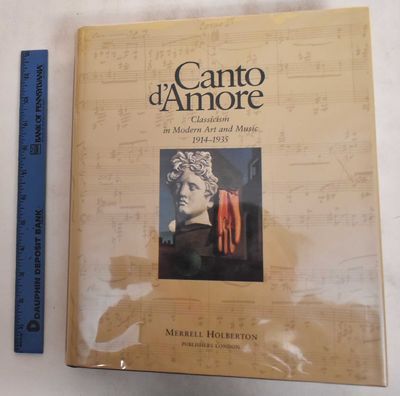 by Boehm, Gottfried; Ulrich Mosch; Katharina Schmidt
Basel: Öffentliche Kunstsammlung Basel, Kunstmuseum, 1996. Hardcover. VG/VG some discolration on bookblock. Dj has clear mylar covering. Blue cloth boards with cream colored writing. Tan colored dj with color illustration and iilstration in background 490 pages : illustrations (some color). The classicism of the 1920s has usually been understood as a counter-modernist, reactionary tendency, summed up in Jean Cocteau's phrase, 'return to order' (Rappel a l'ordre). But the exhibition and catalogue Canto d'Amore, a title taken from De Chirico's key 'metaphysical' painting of 1914, demonstrates that this classicism should be more correctly understood as an alternative modernism, a 'modernist classicism'. The changes of direction undertaken by artists and. Composers such as Picasso or Stravinsky after the First World War were not a return to the status quo before Cubism or before the new music but a continuation of modernism by other means. Reference back to the classical tradition (or traditions) by such artists and composers did not mean imitation or academicism but necessarily involved a profound alteration of the classical content and form. The complex theme, 'classicism in modern art and music 1914-1935', which is. Essential to the understanding of the development of art and music between the Wars, is pursued in a number of important essays by leading scholars in the field. Five introductory essays lay out the general theme, and there is also discussion of the related situation in architecture and literature.-Dustjacket`. (Inventory #: 181389)
$42.00 add to cart or Buy Direct from Mullen Books
Share this item