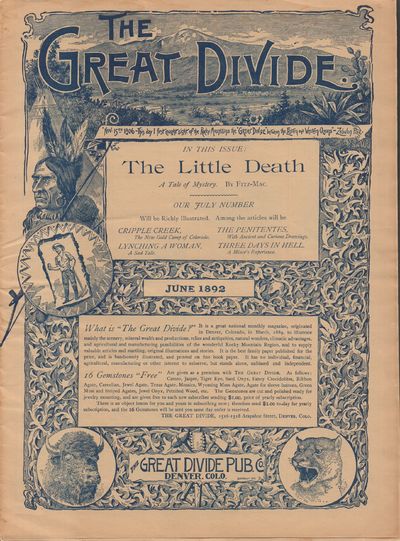 Denver, Colorado: Great Divide Publishing Co.. Good. 1892. Magazine. Magazine with many illustrations. Paginated [69]-88. Minor tearing along spine; leaves have toning and foxing as expected. The Great Divide was a monthly magazine established in March 1889 and published out of Denver, Colorado. It highlighted opportunities found in the Rocky Mountain region and revealed the region's scenery, western exploration, mineral wealth, agriculture, and American Indians. The magazine was profusely illustrated with full page illustrations and many advertisements. Although some of the stories seem a little embellished, the magazine provided a glimpse into the happenings of 19th century Colorado and had a few notable contributors. Feature articles in the issue include "The Little Death", a tale of mystery involving the confession of a prisoner, Nicholas Bone, and the Governor of Colorado, Alva Adams, and a piece on the gold and silver found at Durango, Colorado. There are also many advertisements for mining operations in Creede. ; B & W Illustrations; 11" x 15" . (Inventory #: 022127)
$45.00 add to cart Available from
Back of Beyond Books
Share this item

Boulder : Johnson Books , 1998
(click for more details about All My Rivers Are Gone - A Journey of Discovery through Glen Canyon)

Petroglyphs and Pictographs of Utah: Volume Two: the South, Central, West and Northwest

Salt Lake City, Utah : Utah Museum of Natural History , 1987
(click for more details about Petroglyphs and Pictographs of Utah: Volume Two: the South, Central, West and Northwest)
View all from this seller>