Summary of the Art of War, or, A New Analytical Compend of the Principal Combinations of Strategy, of Grand Tactics and of Military Policy 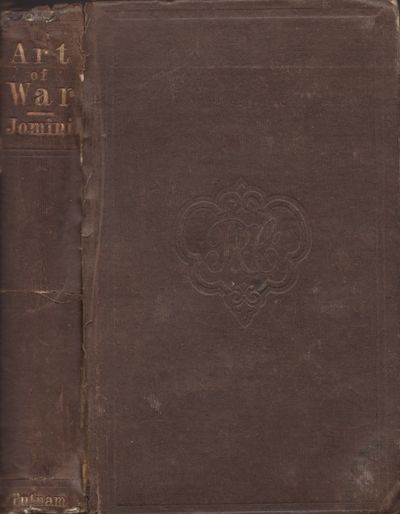 by Jomini, Baron De (General-In-Chief, Aide-De-Camp General to His Majesty the Emperor of All the Russias)
New York: G. P. Putnam and Co, 1854. First Edition. Hardcover. Fair. 12mo. [3], 353 pages, [2]. Three folding plates towards the back of the book. Dark brown cloth hardcover with publishers seal on the covers. Gilt title on the spine. The cloth is split on the spine and the front outer joint and chipped head of the spine. The front board is a bit loose. Contents are slightly shaken. Corners are bumped. Light toning to the paper and occasional light pencil marks in the margins. Folding plate #1 has an approx. 3" closed tear with no loss of content. "Geo. C. Dickinson Colham Depot Albemarle Co Va" small printed label on the front paste down. "Geo. C. Dickinson Albemarle Co. Va. June, 1859" written in light pencil on the yellow right front flyleaf. His name is also written in pencil on the title page. Another later name in newer pen written on the front blank end sheet. Several copies of the 1862 edition located in OCLC. No copies of the 1854 edition located. Scarce in the trade. Fair only. (Inventory #: 22842)
$150.00 add to cart or Buy Direct from Americana Books
Share this item

My Life-Story for Young and Old

n.p. : Privately Printed , 1930
(click for more details about My Life-Story for Young and Old)

Gravestone Chronicles I: Some Eighteenth-Century New England Carvers and Their Work

Boston : New England Historic Society , 1997
(click for more details about Gravestone Chronicles I: Some Eighteenth-Century New England Carvers and Their Work)
View all from this seller>