Breakfast At Tiffany’s. A Short Novel and Three Stories. 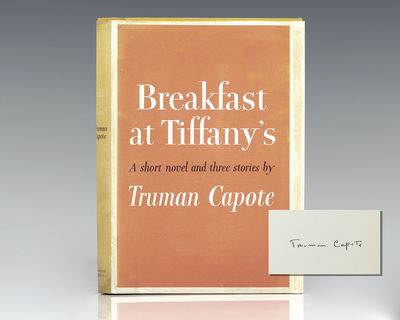 by Capote, Truman
New York: Random House, 1958. First edition of Capote's seductive, wistful masterpiece. Octavo, original cloth. Signed by Truman Capote on the half-title page. Fine in a near fine dust jacket. Jacket design by Ismar David. A very sharp example. "Truman Capote is the most perfect writer of my generation. He writes the best sentences word for word, rhythm upon rhythm. If you want to capture a period in New York, no other book has done it so well. He could capture period and place like few others" (Norman Mailer). The film adaptation was directed by Blake Edwards, starring Audrey Hepburn and George Peppard. (Inventory #: 119683)
$6,000.00 add to cart or Buy Direct from
Raptis Rare Books
Share this item