THE LAND CALLED CHICORA: THE CAROLINAS UNDER SPANISH RULE WITH FRENCH INTRUSIONS 1520-1670 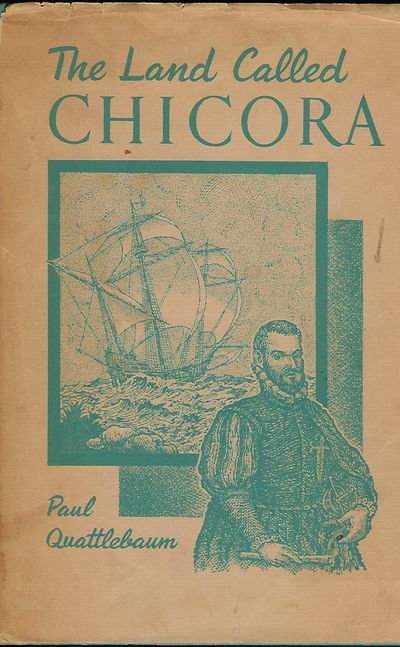 by QUATTLEBAUM, Paul
Gainesville: University of Florida Press, 1956. First Edition. Signed presentation from Quattlebaum on the half-title page: "For Mrs. Maud M. Ambrose with best of good wishes. Paul Quattlebaum." An uncommon book! One of the little known but important Spanish explorations of the east coast of what is now the United States is that of Lucas Vazquez de Ayllon in 1526. The area was known as the "Land of Chicora," and its boundaries where then as now uncertain. This study of the first Spanish attempts at settling the Carolinas, and of the Chicora Indians, treats all European contacts prior to 1670. The author describes the earliest explorations of the new land, the Spanish settlement in 1526 at the mouth of the Waccamaw River across from present Georgetown, South Carolina, contention between France and Spain, the English colony, the Indians, and resulting rivalry of all parties for the land. The area covered in this study is the country extending along the Atlantic coast from Savannah, Georgia, to Wilmington, North Carolina, and inland including what is now northeastern Georgia and southeastern North Carolina with all of South Carolina in between. 8vo., blue cloth in fragile dust jacket; 153 pages. Illustrated.. Very Good (covers nice; contents clean & tight with some browning title page from an old newspaper article placed there); bit of edgewear & soil (very tiny hole rear panel and interior mends along spine with clear, archival tape) d/j. (Inventory #: 57257)
$75.00 add to cart or Buy Direct from Antic Hay Books
Share this item
Antic Hay Books
Offered by