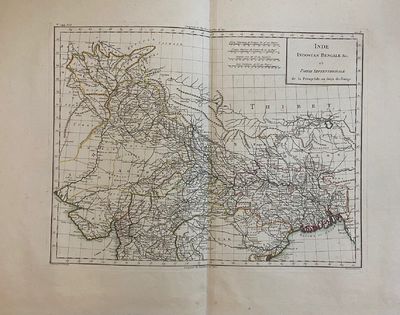 by TARDIEU, Pierre Francois
Paris: Edme Mentelle, 1802. Map. Engraving with hand coloring. Image measures 19 5/8" x 25 1/4". This striking 1802 map by Tardieu of the Himalayan region, extending from the deltas of the Indus River to the Ganges River, shows northern India, the Punjab, Nepal, and present-day Pakistan, Bangladesh, and part of Afghanistan. The highly detailed map identifies towns, cities, roads, and rivers. Mountains are depicted pictorially, and regional boundaries are hand colored. Prior to the 19th century, paper makers in Europe typically used rags and old textiles as their raw materials. This often left the paper with an unappealing yellow tinge. Towards the end of the 18th century, paper makers began added blue pigments such as smalt and indigo dyed cloth. This map is a beautiful example of the blue-tinged paper of this time. The map is in good condition, with minor toning along centerfold. Wide margins as issued, with some wear due to age; not affecting the image. (Inventory #: 298523)
$175.00 add to cart or Buy Direct from
Argosy Book Store
Share this item