THE ADVENTURES OF MARIO 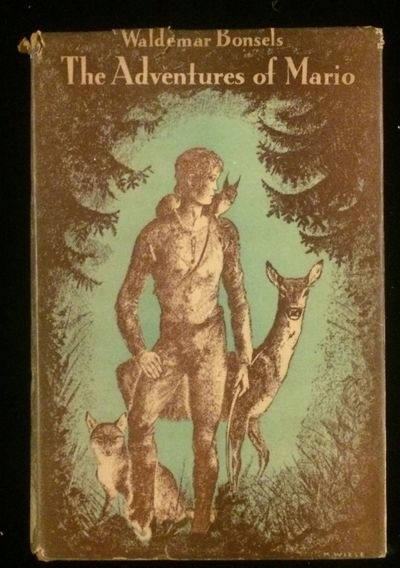 by Bonsels, Waldemar. Chambers, Whittaker (translated by). Weise, Kurt (illustratoins)
NY: Junior Literary Guild, 1930. 1st Edition. Hardcover. Very Good+/Very Good. Story of boy facing the harshness of nature and becoming a man, by German children's author (and noted pro-Nazi, ant-Semite) Waldemar. Translated for American publication by Whittaker Chambers who at the time, ironically was a Commie and Soviet spy before he spilled his guts years later in the Alger Hiss case. What a pair! To boot, the book is illustrated by German born Kurt Wiese, who had illustrated Felix Salten's Bambi (1923), which Chambers translated. Ah, what webs were woven in juvenile publishing pre-WWII!!! Who knew? Solid book, soiled edge. Dustjacket chipped mostly along top edge. (Inventory #: 012111)
$50.00 add to cart or Buy Direct from
Johnnycake Books
Share this item

THE HISTORY OF THE LIVES OF ABEILLARD AND HELOISA; COMPROMISING A PERIOD OF EIGHTY-FOUR YEARS FROM 1079 TO 1163 WITH THEiIR GENUINE LETTERS FROM THE COLLECTION OF AMBOISE. A NEW EDITION (2 volumes)

Basil : J. J. Tourneisen , 1793
(click for more details about THE HISTORY OF THE LIVES OF ABEILLARD AND HELOISA; COMPROMISING A PERIOD OF EIGHTY-FOUR YEARS FROM 1079 TO 1163 WITH THEiIR GENUINE LETTERS FROM THE COLLECTION OF AMBOISE. A NEW EDITION (2 volumes))

THE BALLAD OF THE HARP-WEAVER

NY : Frank Shay , 1922
(click for more details about THE BALLAD OF THE HARP-WEAVER)
View all from this seller>