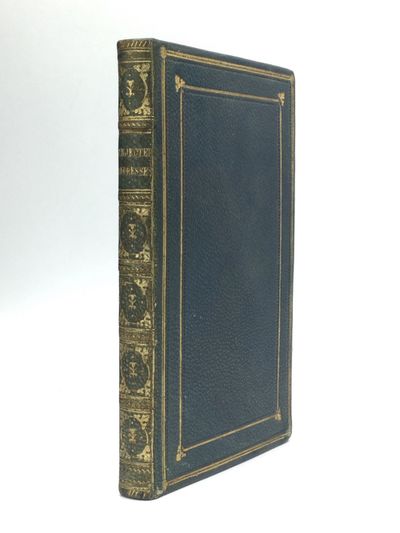 by Smith, James (1775-1839) and Horace (born Horatio, 1779-1849)
London: John Miller, 1812. First Edition. Hardcover. Very good. The clipped signature of Horatio Smith is affixed to a prefatory blank leaf. Popular book of parodies inspired in part by the public competition for an address to be spoken at the reopening of the Drury Lane Theatre, which had been destroyed by fire. In the line of 18th century pastiches focussed on a single subject in the style of poets of the time, it contained 21 good-natured pastiches of contemporary authors, including William Wordsworth, Lord Byron, Robert Southey, Walter Scott, Samuel Johnson, and Samuel Taylor Coleridge. The book's popular success set the fashion for a number of later works of the same kind. 12mo. Full blue morocco binding, with decorative gilt stamping, five raised bands, ornamental dentelles, and marbled endpapers. The authors' names have been neatly handwritten on the title page. The signed bookplate of J.G. Rodney Ward of Yatton Court, Herefordshire is affixed to the front pastedown. The spine is moderately sun faded; otherwise very good. (Inventory #: 72351)
$150.00 add to cart Available from Johnson
Share this item

New York : Association Press , 1972
(click for more details about HUMAN SEXUALITY AND SOCIAL WORK)
View all from this seller>