Round Kangchenjunga; A Narrative of Mountain Travel and Exploration 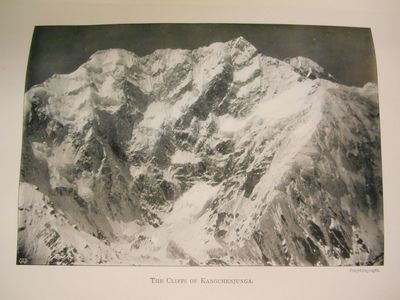 by Freshfield, Douglas W.; Sella, Vittorio; et al (Photographs)
London: Edward Arnold, 1903. First Edition. Hardcover. Very good +. Sella, Vittorio. First printing, quarto size, 392 pp., plus plates, maps, and folding panorama. This work by Douglas William Freshfield (1845-1934), enhanced by photographs of the great mountain photographer Vittorio Sella (1859-1943), is considered by many to be one of the best of the classic books on mountaineering. At the time the trip was taken, although the team had the authorization of the ruler of Sikkim, they had none by Nepal as it was then a closed kingdom. The expedition lasted seven weeks, and when they descended into Nepal, "[t]he first villagers they met...were astonished to learn that this tattered group had come down from the north" (n.b., quote from "Summit, Vittorio Sella, Mountaineer and Photographer the Years 1879-1909", published by Aperture in 1999, p. 67).

Freshfield began mountaineering as a young man, making the first ascent of the Tour Ronde in 1867. It was in 1899, after contemplating and planning the trip for many years, that he travelled to Green Lakes with Sella, already known as an accomplished mountain photographer. Freshfield became the first mountaineer to explore the western face of Kangchenjunga (the third highest mountain in the world), which he clearly loved; as he wrote in the book's Preface, he was convinced that "nowhere else on the earth's surface can there be found, within so small a radius, a combination of tropical luxuriance, sylvan beauty, and mountain sublimity equal to that which meets the traveller's eyes among the valleys and highlands of Sikhim and Eastern Nepal."

Sella was invited by Freshfield to join the expedition; by then he "had been photographing for twenty years, and had earned a reputation as one of the leading mountain photographers in the world" (Ibid, p. 65). It was no simple matter to obtain these photographs, for the photographers not only faced the same challenges of the climb as the rest of the party but had to bring the heavy photographic equipment with them - in Sella's case, including large glass photographic plates. Their work is truly awe-inspiring and brings to stark life the souls of these mountains when they were first conquered by men.

This the first state of the first edition, with the gilt vignette on the front board of a temple of Sikhim.

___DESCRIPTION: Bound in full red cloth over boards, gilt decoration on the front, gilt lettering on the spine, replete with reproductions of thirty-eight plates of black-and-white photographs by Sella (plus two by other photographers (G. Millais and E. Garwood)), plus a line drawing after a photograph by Dr. Boeck, plus the magnificent eight-fold panorama of "The Kangchenjunga Group" by Sella (which opens to over 36" long), plus three maps, one in-text and two folding (the first "Material for a Geological Map of Sikhim", the map measuring approximately 16.5" by 21.75", in black and red; and the second being "The Glaciers of Kangchenjunga", the map measuring approximately 19" by 18", in black, brown and blue with routes in red), with six Appendices at the back which total almost ninety pages; quarto size (10.25" by 6.5"), pagination: [i-vi] vii-xvi, [1] 2-373 [374, printer's statement] [375-376, publisher's ad for "The Exploration of the Caucasus"], note that plates and maps are not included in the pagination.

___CONDITION: Better than very good, with clean boards, the gilt vignette on the front board bright, a strong, square text block with solid hinges, the interior is clean and bright, volume has been collated complete, the two folding maps each near fine to fine, clean, with short closed tears at the point the edge was tipped into the book and overall extremely light edgewear, no tears to the folds, and while free of prior owner names or inscriptions there are two vintage bookseller pencilled markings on the front free endpaper ("74500" (an inventory no.?) and "£ 22.00") and a very small stamp at the bottom of the rear pastedown which appears to read "Daume"; some sunning to the top few inches of both boards and the spine, gilt lettering on the spine somewhat dulled, light overall wear to the binding including the corners being slightly rubbed, the paper covering the front hinge just beginning to crack but the hinge strong and sturdy, two ; note that a professional (name available upon request) did some light restoration work to the joints, head and tail of the spine which is barely visible, the binding now strong.

___Swan's Fine Books is pleased to be a member of the ABAA, ILAB, and IOBA and we stand behind every book we sell. Please contact us with any questions you may have, we are here to help. (Inventory #: CNPK001)
$1,100.00 add to cart or Buy Direct from
Swan's Fine Books
Share this item

We cheerfully accept returns for any reason within 30 days, so long as the book(s) is/are returned in the same condition as when sent. We will refund the price you paid for the book, plus shipping if the book was misdescribed.
More from this seller

Early Lithographed Books; A Study of the Design and Production of Improper Books in the Age of the Hand Press, With a Catalogue

London : Farrand Press & Private Librairies Association , 1990
(click for more details about Early Lithographed Books; A Study of the Design and Production of Improper Books in the Age of the Hand Press, With a Catalogue)
View all from this seller>