The Annals of San Francisco; Containing A Summary of the History of the First Discovery, Settlement, Progress, and Present Condition of California, and a Complete History of all the Important Events Connected with Its Great City: To Which are Added Biographical Memoirs of Some Prominent Citizens 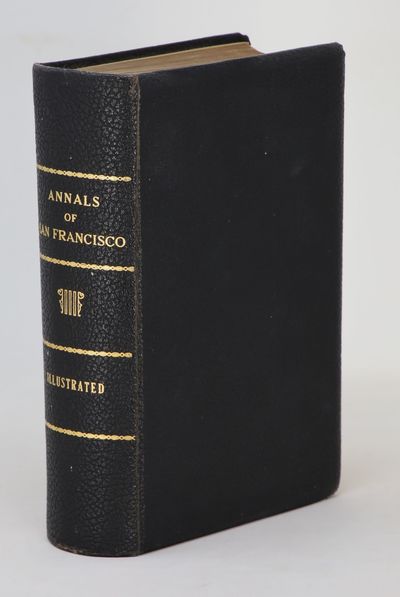 by Soulé, Frank; Gihon, John H. and Nisbet, James
New York: Appleton, 1855. First Edition. Hardcover. Very good. 824 pp, with illustrations and two maps (a single-page map of San Francisco and a folding General Map Showing the Countries Explored & Surveyed by the Unied States & Mexican Boundary Commission in the Years 1850, 51, 52 & 53). Re-bound in black buckram with gilt lettering on spine, new endpaper. Repair to verso of General Map, some offsetting from frontispiece to title page (despite presence of a tissue guard); binding sound, text clean. This popular and influential history contains much infomation about mining and the Gold Rush and a wealth of detail about the early history of San Francisco. As Gary Kurtz points out in the Dorothy Sloan Volkmann sale catalogue (p. 251), the book is "a remarkable testament to the explosive development of San Francisco and California. Just seven years after the discovery of gold, this instant city lived enough history to produce an 824-page book about itself." Wheat, in Mapping the Transmississipi West (193), says the General Map is "Among the most important Western maps." Zamorano 80 #70; Graff 3901; Howes S-769; Kurutz 594. (Inventory #: 21421)
$175.00 add to cart or Buy Direct from Walkabout Books
Share this item

The Ghanaian's Image of the Missionary, An Analysis of the Published Critiques of Christian Missionaries by Ghanaians, 1897-1965

Leiden : E.J. Brill , 1970
(click for more details about The Ghanaian's Image of the Missionary, An Analysis of the Published Critiques of Christian Missionaries by Ghanaians, 1897-1965)

Dwight, IL : Dwight Art Company , 1892
(click for more details about Souvenir of Dwight, Illinois)
View all from this seller>