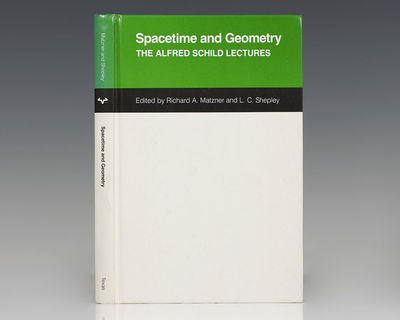 by Matzner, Richard A. and L.C. Sheply (editors), [Stephen Hawking]
Austin: University of Texas Press, 1982. First edition of this work on space. Octavo, original cloth. From the library of Stephen Hawking with his name written on the front free endpaper. Stephen Hawking was a theoretical physicist, cosmologist, and author who was director of research at the Centre for Theoretical Cosmology at the University of Cambridge at the time of his death. Hawking's scientific works included a collaboration with Roger Penrose on gravitational singularity theorems in the framework of general relativity and the theoretical prediction that black holes emit radiation, often called Hawking radiation. He was the first to set out a theory of cosmology explained by a union of the general theory of relativity and quantum mechanics. Hawking may be one of the most recognizable of theoretical physicists in part due to ALS, which gradually paralyzed him over the decades. After the loss of his speech, he was able to communicate through a speech-generating device--initially through use of a handheld switch, and eventually by using a single cheek muscle. He is also well known since he achieved commercial success with several works of popular science in which he discussed his theories and cosmology in general. His book, A Brief History of Time, appeared on the Sunday Times bestseller list for a record-breaking 237 weeks. Hawking's works are mentioned a number of times in these lectures, as Hawking published 'Singularities and the geometry of space-time' in 1966, and he and mathematician George Ellis wrote a treatise in 1973 entitled, The Large Scale Structure of Space-Time. Near fine in a very good dust jacket. An exceptional association from this giant in the world of theoretical physics. These reports, at the forefront of relativity theory when they were written, in particular the geometrical aspects of spacetime theory, were the result of the Alfred Schild Memorial Lecture Series presented at the University of Texas at Austin beginning in 1977. Each article is a self-contained summary of an important area of contemporary gravitational physics, while the book as a whole provides an overview of a wide variety of the problems of general relativity and gravitation. (Inventory #: 119377)
$4,000.00 add to cart or Buy Direct from
Raptis Rare Books
Share this item