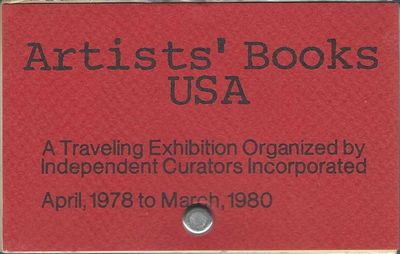 by WILSON, Martha & FRANK, Peter
Ca. 150 catalogue cards bolted. Washington, D.C. & New York: Independent Curators Incorporated, 1978-80. An uncommon exhibition catalogue, important in the early popularization of artists' books. Curated by Wilson and Frank, the exhibition included more than a hundred examples of book art, representing a wide variety of publishing methods. It also broadened the distribution of these publications, which were normally spread informally, to art spaces across North America. The show was hosted at six locations: Allen Memorial Art Museum; the University of Hartford; Dalhousie University Art Gallery; the University of California, Irvine; the Cleveland Center for Contemporary Art; and the Washington Project for the Arts. The present catalogue begins with a history of the book as an art form by Wilson and Frank. Featured are the early works of Laurie Anderson, John Baldessari, Guy de Cointet, Johanna Drucker, Caroline Greenbaum, Robert Jacks, Pati Hill, Alison Knowles, Sol LeWitt, Gloria Klein, Bruce Nauman, Charlemagne Palestine, Richard Prince, Ed Ruscha, Lawrence Weiner, Rachel Youdelman, Susan Wick, Joyce Cutler Shaw, and many others. Each catalogue card holds one entry and bibliographical information on the item, including the edition size (some are unique), and the illustration method. Fine copy, some cards with minor creasing. â§ A. Desjardin, The Book on Books on Artists Books (2nd ed.: 2013) 24. (Inventory #: 7419)
$550.00 add to cart or Buy Direct from
Jonathan A. Hill, Bookseller
Share this item
Jonathan A. Hill, Bookseller, Inc.
Offered by