The Farallones : the painted world, and other poems of California : with fifty-three illustrations and with a supplementary history and description of the Farallones, including notes on their plant, bird and animal life. [In two volumes, complete] 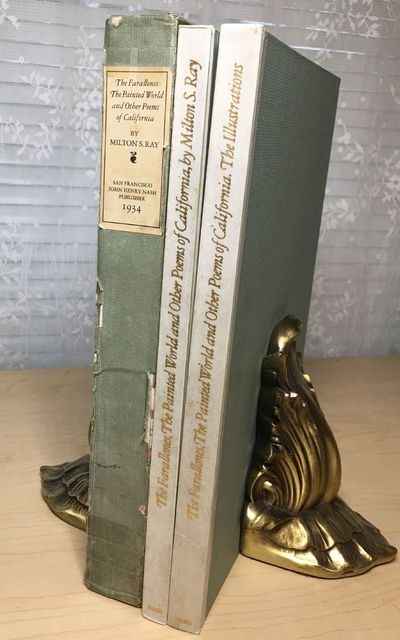 by Milton S Ray
San Francisco: John Henry Nash, 1934. Limited Edition, First Edition. 1/4 vellum. Near fine/fair. A near fine limited, first edition in a fair slipcase [O'Day pg. 87]. This copy being number 374 of 2000 printed. Signed with a dedication to Lord Addington (possibly John Hubbard, 3rd Baron Addington OR Raymond Hubbard, 4th Baron Addington) by the author on the front pastedown. One quarter vellum under sage green paper boards. Briggs Books bookplate on front pastedown of both volumes. Volume two showing two pin impressions on spine, otherwise both volumes fine. Bound promotional pamphlet from John Nash included in the set, also fine save for pencilled price and edition information. Volume I is poetry and Volume II is primarily plates. The matching sage green slipcase did its job well, but is the worse for wear, about fair, showing scotch tape repairs at foot and crown of case, peeling on spine and a split at top edge of case. Deckled pages. 2 volumes ., xii, 86 pp., frontis . ; xxiv [ii] [101 pp.]., frontis ., 50 pls; Quarto. Milton Smith Ray, born 1881 in San Francisco, is best remembered for his role as an engineer and local industrialist whose family company, the Ray Oil Burner Company, played a major role in the evolution of steamship engines through their oil burner/piston pump. The company had enormous success and Ray lived comfortably until his death in a mansion built by Henry Clay Smith at 2901 Broadway in San Francisco. The house sits on a hill overlooking the San Francisco Bay on a lot Ray purchased in 1925 from future president, and at the time his fellow student, Herbert Hoover. His affluent life as an industrialist enabled Ray to pursue his other passions as well: history, poetry, oology, and ornithology. Milton S. Ray was an avid and incredibly dedicated ornithologist who went on yearly field trips around the world and all over California collecting eggs, nests, and specimens and documenting his observations. He pursued this passion in a diligent manner from 1892, at age 11, until his death in 1946. When Ray passed away in 1946, his extensive egg collection was donated to the Museum of Vertebrate Zoology. The Museum currently houses 2833 of his collected specimens. He published often in the field of ornithology and also had several volumes of poetry published surrounding his experiences in nature, which he dedicated to his children..." Online Archive of California (Inventory #: 1024)
$115.00 add to cart Available from Uncommon Works
Share this item

90 day return guarantee, for up to 90 days after delivery if an item arrives misdescribed or damaged. The authenticity of signatures guaranteed.Please note: Large, heavy and multi-volume sets billed at actual postage.
More from this seller

Strassburg : Heitz & Cie , 1930
(click for more details about Kœnig Salomon und Marcolphus (''Solomon and Marcolf"))
View all from this seller>