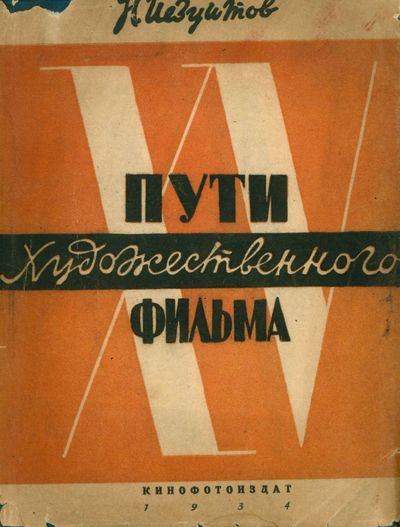 by Iezuitov, Nikolai Mikhailovich
Moscow: Kinofotoizdat, 1934. Octavo (17 × 12.5 cm). Original decorative dust-wrappers over blind wrappers; 150, [4] pp. Photo-illustrations. Chipping to edges of dust-jacket; else about very good. First edition of this popular film history celebrating the first fifteen years of Soviet cinema, illustrated with portraits of major Soviet directors, cinematographers, and actors including Lev Kuleshov, Dziga Vertov, Sergei Eisenstein, and Vsevolod Pudovkin. The text is divided into five sections, spanning the period of the Russian Civil War, characterized by newsreels and stylistic innovations, through the first Five-Year Plan and its various cinematic manifestations, the "victory of realism" in the later 1920s and closing with the development of sound film. The author, film historian and critic Nikolai Iezuitov (1899-1941) is rightfully called one of the founding fathers of Soviet film historiography with his texts setting the standard for party-line Soviet historians for generations to come. Iezuitov taught film history in 1936-1941 at the All-Union State Institute of Cinematography (VGIK), heading the film history department starting in 1939. His other major projects included a 1937 monograph on Vsevolod Pudovkin. He died in action in the first months of WWII. Scarce in the trade. (Inventory #: 51077)
$300.00 add to cart or Buy Direct from
Bernett Penka Rare Books
Share this item