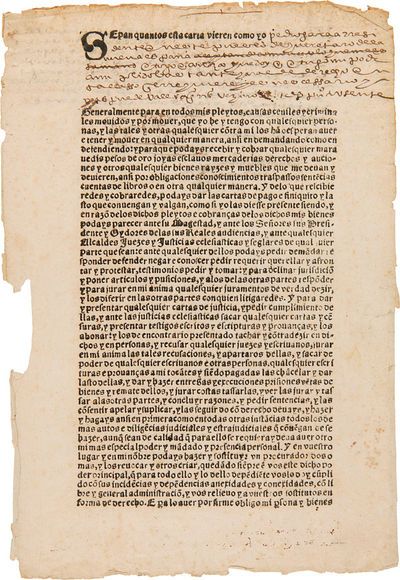 by Carpenter, Edwin H.
Los Angeles: The Plantin Press, 1965. [4],14pp., plus printed form (completed in manuscript), 12 1/4 x 8 1/2 inches in pocket. Folio. Half cloth and paper boards, gilt design on front board, printed paper spine label. Small nick to lower outside edge of front board, slight soiling. Bookplate on front pastedown, earlier invoice laid in. Very good. A 16th-century Mexican broadside from the collection of Dr. Emilio Valtón, in the rare book with explanatory text by Edwin Carpenter. Carpenter's book was printed in an edition of 140 copies by Saul and Lillian Marks at the Plantin Press. The piece present here is a CARTA DE PODER (or power of attorney) form accomplished on September 6, 1589 in Mexico City, by the second printer in the New World, Pedro Ocharte. The text is printed on one side of the sheet, with seven lines of manuscript on the recto, and nine lines of manuscript and a signature on the verso. Ocharte took over the press from Juan Pablos and operated it until 1592. Valtón owned a total of thirty-nine pre-1600 broadsheets. This represents virtually the only chance to own an example from the first press in the New World. This copy was previously in the collection of Occidental College, a gift of legendary librarian and bibliographer Lawrence Clark Powell (class of 1928). (Inventory #: WRCAM56199)
$2,000.00 add to cart or Buy Direct from
William Reese Co. - Americana
Share this item