[SAMMELBAND OF SIX WORKS FROM THE PINKERTON DETECTIVE AGENCY, INCLUDING FOUR ADDRESSES DELIVERED BY WILLIAM A. PINKERTON TO THE ANNUAL CONVENTION OF THE INTERNATIONAL ASSOCIATION OF CHIEFS OF POLICE IN THE FIRST DECADE OF THE 20th CENTURY] 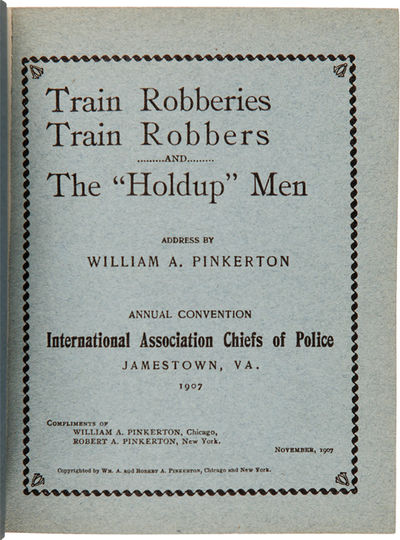 by Pinkerton, William A.
[Chicago and New York, 1907. Typed contents leaf and six pamphlets in original printed wrappers bound in one volume, as described below. Illustrations. Thick square 12mo. Later 20th-century buckram, gilt leather labels. Light edge wear. Internally clean, two short repairs to titlepage of one pamphlet. Overall very good plus. A bound collection of six separately- published works by the Pinkerton Detective Agency, four of which are speeches by William A. Pinkerton to the International Association of Chiefs of Police in various cities between 1904 and 1907. All six works are illustrated with images of Pinkerton agents, law enforcement officials, and/or criminals. All of the pamphlets are quite rare. William A. Pinkerton (1846-1923) was the eldest son of Alan Pinkerton, founder of the famed (and infamous) detective agency and ran the company from Chicago while his younger brother Robert maintained the offices in New York. Here, William Pinkerton uses colorful anecdotes and stories from the annals of the Pinkerton firm that provide good evidence why he was a sought-after speaker at these police conventions and other events. After his father's death in 1884, William moved the company's focus from detective work to anti- labor and strike-breaking activities. The Pinkertons thereafter participated in the suppression of several major strikes, including the Homestead Strike of 1892. The pamphlets present here, in bound order, are as follow: 1) ADAM WORTH, ALIAS "LITTLE ADAM." THEFT & RECOVERY OF GAINSBOROUGH'S "DUCHESS OF DEVONSHIRE" 1904. January, 1904. [12],23pp., plus twelve photographic portraits. Third edition. An examination of the career of German-born American criminal mastermind Adam Worth, who is most famous now for inspiring Arthur Conan Doyle to create Sherlock Holmes's archenemy Professor Moriarty. A Scotland Yard detective in the late-19th century referred to Worth as "the Napoleon of the criminal world" because of his short stature. Worth was most notable in his own time for stealing the original painting of Thomas Gainsborough's "Blue Boy." The photographic plates picture the Pinkertons, Worth, and many of Worth's accomplices. Nine copies are located in OCLC. OCLC 3832996, 959390348. 2) TRAIN ROBBERIES, TRAIN ROBBERS AND THE "HOLDUP" MEN. November, 1907. 84pp., including thirty-three photographic portraits. An address by Pinkerton delivered to the annual convention of police chiefs in Jamestown, Virginia in 1907. Here, Pinkerton provides a history of the types of men who rob trains. As he writes near the beginning: "The 'hold-up' robber originated among the bad men of the gold mining camps. Unsuccessful as a prospector, too lazy to work, and with enough bravado and criminal instinct to commit desperate crimes, he first robbed prospectors and miners en route on foot to stage stations, of their gold dust and nuggets, becoming bolder, looting stages and eventually after the railroads were built, he 'held-up' railway trains and robbed express cars." The portraits include Jesse James (including a posthumous portrait), Cole Younger, Charlie Pitts, Charlie Ford and other members of the James Gang, as well as James Burrows, the Sontag brothers, the Dalton Boys, other members of the Dalton Gang, the "Wild Bunch" (including Etta Place and Laura Bullion), and many others. Often reprinted, there are about thirty institutional copies in OCLC over several records. 3) THE "YEGGMAN" BANK VAULT AND SAFE BURGLAR OF TO-DAY. August, 1904. [6],41pp., including twenty-one photographic portraits. An address by Pinkerton delivered to the annual convention of police chiefs in Saint Louis in June, 1904. This talk by Pinkerton details the activities of the nighttime bank vault thieves and safe crackers - the "Yegg" - and his accomplice, the "Gay Cat." The photographs picture such Yeggmen as Topeka Joe, Denver Harry, Mass Dick, Frisco Slim, Cal Shorty, Toronto Jimmy, Black Billy, and numerous others from all over the country. Only four copies in OCLC. OCLC 80398973, 79562140. 4) BANK..."SNEAK"...THIEVES. November, 1906. 52,[1]pp., including twenty-seven photographic portraits and one illustration of a "Professional 'Bank Sneak.'" A paper read by Pinkerton to the attendees of the annual convention of police chiefs at Hot Springs, Arkansas in April, 1906. Pinkerton's talk concerns the "professional 'sneak' thief" and his associates responsible for robberies mostly at banks and jewelry stores. These thefts mainly occur by employing a two-man team - one who distracts and another who commits the crime. Pinkerton mentions Adam Worth as "undoubtedly in his time the 'King of Sneaks'" though he does not include a portrait of him in this work. There are, however, over two dozen portraits of other famous sneaks, such as Rufus Minor, "Little Joe" McCluskey, Frankie Buck, and many others. OCLC reports fifteen institutional copies. OCLC 25121642, 366494518. 5) "FORGERY." August, 1905. 44,[1]pp., including twenty photographic portraits and one illustration of "The Forger at Work." An address by Pinkerton delivered to the annual convention of police chiefs in Washington, D.C. in May, 1905. Here, Pinkerton talks about the "carefully laid plans and skillful reproductions" of the forger, and illustrates "the decline of the professional forger during the past fifteen years, and the reasons leading thereto." Expert forgers pictured here include George Wilkes, Charlie Becker, John W. Doyle, Alonzo J. Whiteman, Max Steel, and a dozen others. About a dozen copies in OCLC over several records. 6) TIMOTHY WEBSTER SPY OF THE REBELLION. November, 1906. 10pp., including two portraits. A short but informative biographical appreciation of one-time Pinkerton agent Timothy Webster. An associate of Allen Pinkerton, Webster was a Union spy during the Civil War. He was eventually outed while in the enemy capitol at Richmond and executed on April 29, 1862 by order of Confederate President Jefferson Davis. Webster was the first spy executed during the Civil War. The two portraits in this pamphlet picture Webster and Allen Pinkerton. OCLC reports just thirteen copies. OCLC 13168138. A nice assemblage of Pinkerton Detective Agency publications covering some of the most notorious criminals of the late 19th and early 20th centuries. (Inventory #: WRCAM56205)
$1,750.00 add to cart or Buy Direct from
William Reese Co. - Americana
Share this item

JAMAICA. RETURN TO AN ADDRESS OF THE HONOURABLE THE HOUSE OF COMMONS, DATED 19 MARCH 1839; - FOR, COPIES OF ANY COMMUNICATIONS ADDRESSED TO THE SECRETARY OF STATE BY THE AGENT FOR THE ISLAND OF JAMAICA, RELATIVE TO THE CONDUCT OF THE NEGRO POPULATION IN THAT ISLAND [caption title]

[London 1839
(click for more details about JAMAICA. RETURN TO AN ADDRESS OF THE HONOURABLE THE HOUSE OF COMMONS, DATED 19 MARCH 1839; - FOR, COPIES OF ANY COMMUNICATIONS ADDRESSED TO THE SECRETARY OF STATE BY THE AGENT FOR THE ISLAND OF JAMAICA, RELATIVE TO THE CONDUCT OF THE NEGRO POPULATION IN THAT ISLAND [caption title])

THE BOUNDING BILLOW. PUBLISHED IN THE INTERESTS OF AMERICAN MEN-O'-WARSMEN. PUBLISHED AT INTERVALS ON U.S.F.S. OLYMPIA. MANILA, P.I., JUNE, 1898. Vol. I. No. 5...THE BATTLE OF MANILA BAY

Manila, Philippines 1898
(click for more details about THE BOUNDING BILLOW. PUBLISHED IN THE INTERESTS OF AMERICAN MEN-O'-WARSMEN. PUBLISHED AT INTERVALS ON U.S.F.S. OLYMPIA. MANILA, P.I., JUNE, 1898. Vol. I. No. 5...THE BATTLE OF MANILA BAY)
View all from this seller>