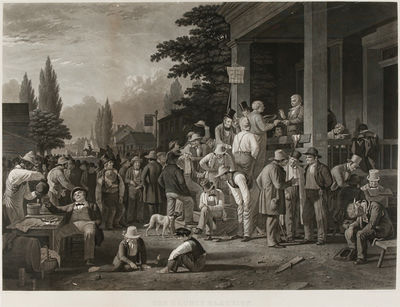 George Caleb Bingham was born on a plantation in Virginia but grew up in Missouri, where he lived most of his life. He was largely a self-taught painter, but one with immense talents and instincts; creating - in addition to a steady output of dignified portraits - a series of genre paintings depicting, with a blend of grace and humor, the way of life of the people of the plains and the Missouri river. Bingham was himself a politician of some renown, with an interesting record of party hopping. Bingham served a term as a Missouri state Congressman for the Whig party beginning in 1848, sided with Lincoln and the Republicans during the Civil War, and then served as a delegate for the Democratic Party in 1872. At various times, he also served as Treasurer of Missouri, first chief of police in Kansas City, and the Adjutant-General of Missouri. Throughout his political career, Bingham also remained a productive artist, leaving a catalogue of wonderful paintings that earned him the nickname, the "Missouri Artist."

Bingham's political career inspired some of his finest - and most crowded - genre pictures, including THE COUNTY ELECTION (1851/2), THE COUNTY CANVASS (1853/4, also known as STUMP SPEAKING), and THE VERDICT OF THE PEOPLE (1854), a series of three political crowd scenes which delineated the political process as it existed in Missouri: a blend of free democracy and mild corruption. These paintings often featured Bingham himself, political players in the area, and other Missouri locals known to him.

THE COUNTY ELECTION was the first of Bingham's "Election Series." The original painting resides at the Saint Louis Art Museum, from which the present engraving was taken. The scene captures the energy and excitement of a mid-19th-century American election, depicting election day in Missouri in 1850, as a range of voters from across the social landscape line up at the courthouse to cast their verbal vote to the county clerk, as this election took place before the age of secret or even written ballots. Some voters engage in election-day politicking; others gather around another symbol of democracy, the newspaper. Campaign shenanigans are also well represented here. One of the candidates stands near the front of the line of voters, handing his card to the man next-in-line to vote. Another man further down the stairs lures a voter in with a friendly hand on the shoulder and a calling card of his own. A banner hangs above the scene reading "the will of the people the supreme law." One subject at center-left drags a slumping, probably drunken man to the polls. At left, another man accepts hard cider from an African-American man, in an effort to buy his vote with alcohol. The element of chance is also present in the scene of the two boys at bottom-center. This pair of youths participate in an old ritual where a knife thrown into the ground determines the winner, suggesting that elections are also determined by such blind luck.

"Besides commenting on American electioneering in general, THE COUNTY ELECTION records a particular political event. As many of Bingham's contemporaries would have known, the painting depicts Election Day 1850 in Saline County, Missouri, when the artist himself was running for a place in the State Legislature. Bingham lost that election to E.D. Sappington, whom he represents as the unprincipled candidate in the shiny top hat. Sappington, with his workers, did try to buy votes with liquor, and because he was related to the judge and one of the clerks, the election's outcome naturally aroused suspicion. Bingham did not contest the results, but THE COUNTY ELECTION makes an obvious indictment of his political opponent. The artist himself makes an appearance in the picture as the figure in the stovepipe hat seated on the courthouse steps, attended by a friendly dog and two men in white hats who pause to look over his shoulder. Bingham's quiet concentration sets him apart from the crowd, and we can only wonder whether he is keeping track of the votes in order to tally them for himself, or sketching the unruly practices of a young democracy" - PICTURING AMERICA.

The scene was engraved by a very talented artist in his own right, John Sartain (1808- 97), currently most notable for his 1841 engraving of the Amistad captive, Cinque. Sartain had a prolific career besides, and played a major role in developing and popularizing mezzotint engraving in the United States. Working in Philadelphia from 1830 to the end of the 19th century, the English-born Sartain produced approximately 1,500 prints for books and for several different periodicals, including his own, SARTAIN'S UNION MAGAZINE OF LITERATURE AND ART, which ran from 1849 to 1852. The majority of Sartain's work reproduces historical and allegorical scenes, landscapes, and portraits, many by leading painters of the day who commissioned Sartain themselves, including Bingham for the present work.

TO THE ELECTORS OF THE WESTERN DISTRICT. FELLOW CITIZENS, IN A FEW DAYS YOU WILL AGAIN BE CALLED UPON TO EXERCISE THE DISTINGUISHING PRIVILEGE OF FREEMEN... [caption title and first line of text]

[N.p. 1806].
(click for more details about TO THE ELECTORS OF THE WESTERN DISTRICT. FELLOW CITIZENS, IN A FEW DAYS YOU WILL AGAIN BE CALLED UPON TO EXERCISE THE DISTINGUISHING PRIVILEGE OF FREEMEN... [caption title and first line of text])
View all from this seller>