A VIEW OF THE CONSTITUTION OF THE UNITED STATES OF AMERICA 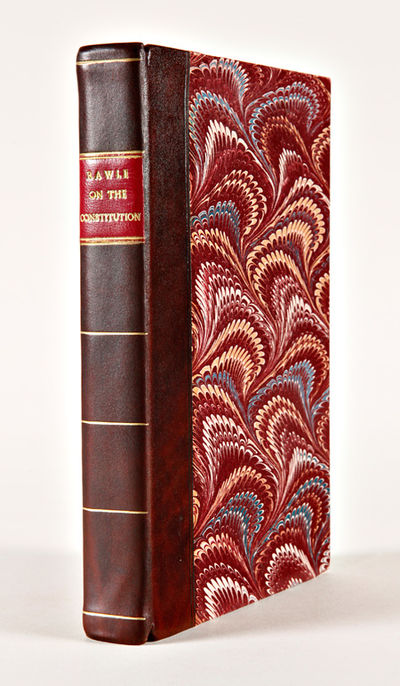 by Rawle, William
Philadelphia: H.C. Carey & I. Lea, 1825. vii,[1],[5]-347pp. Modern antique-style half calf and marbled boards, spine ruled in gilt, gilt label. Ex- library (properly deaccessioned) with ink stamps on verso of titlepage the only indication. Light tanning, a bit of scattered light foxing. Very good. The scarce first edition of this influential study of the United States Constitution, containing a consideration of the rights of states to secede from the Union. Rawle, a Quaker, held Loyalist sympathies as a young man. Born in Philadelphia, he studied law in London before returning home to practice, eventually serving as a chancellor of the Philadelphia bar. Rawle's is a thorough consideration of the several powers in the Constitution, and discusses the rights of states to secede from the Union (though Rawle personally was opposed to the measure). "First authoritative interpretation, in which was admitted the abstract right of state secession. These views exerted a profound influence on Southern political thought" - Howes. "This work, suggesting that Rawle believed the states had the right to secede from the Union, was used as a textbook for many years at West Point and other schools throughout the country. It is therefore generally considered to have influenced subsequent leaders and supporters of the Confederacy, although in fact Rawle opposed secession....Elected to the Pennsylvania legislature in 1789, Rawle declined Wasington's repeated offers to serve as the first Attorney General. Rawle held the post from 1792 to 1800" - Cohen. HOWES R77. SABIN 68003. COHEN 2893. AMERICAN IMPRINTS 22035. (Inventory #: WRCAM56228)
$2,750.00 add to cart or Buy Direct from
William Reese Co. - Americana
Share this item

ARTICLES OF THE UNION FIRE COMPANY, IN THE TOWN OF ST. JOHN, IN ANTIGUA. THE THIRTEENTH DAY OF SEPTEMBER, IN THE YEAR OF OUR LORD 1756 [caption title]

[Antigua 1756
(click for more details about ARTICLES OF THE UNION FIRE COMPANY, IN THE TOWN OF ST. JOHN, IN ANTIGUA. THE THIRTEENTH DAY OF SEPTEMBER, IN THE YEAR OF OUR LORD 1756 [caption title])
View all from this seller>