SELECTED PAPERS ON HYSTERIA AND OTHER PSYCHONEUROSSS 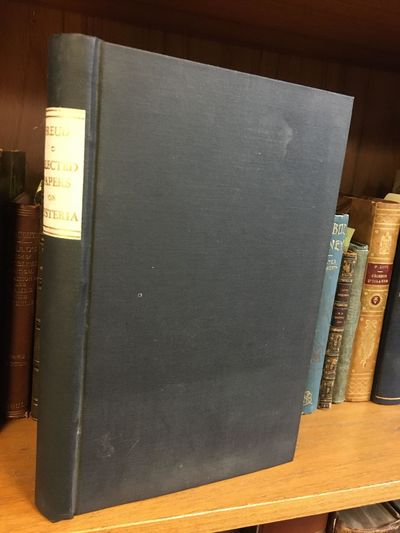 by Freud, Sigmund; Brill, A. A. [translator]
New York: Journal of Nervous and Mental Disease Publishing Company, 1912. Second Edition. Hardcover. Octavo, ix, 215 pages; VG; bound in modern black cloth with paper label on spine, gilt titling; very mild shelfwear; front wrapper bound in; mild wear to fore edge; George Wilbur's copy with his occasional notes, name on title page.; shelved case 10;. Second Edition of the first Freud text to appear in English, with two papers not in the first edition (1909). Brill omitted Breuer's contributions to the 'Studies in Hysteria,' which did not appear in English until 1936. George Wilbur was the second editor of American Imago, following the death of its founder Hanns Sachs, and Wilbur maintained that editorial position from 1947 until 1963. 1336369. Shelved Dupont Bookstore. (Inventory #: 1336369)
$240.00 add to cart or Buy Direct from
Second Story Books
Share this item

THE LIFE AND CORRESPONDENCE OF RUFUS KING [SIX VOLUMES]

Baltimore, MD : John B. Piet , 1879
(click for more details about HISTORY OF MARYLAND FROM THE EARLIEST PERIOD TO THE PRESENT DAY [THREE VOLUMES])
View all from this seller>