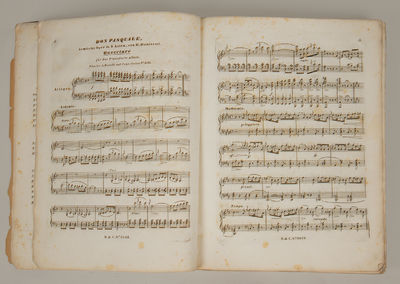 The first edition to contain Donizetti's revisions for the Viennese performance.

Don Pasquale, a dramma buffo in 3 acts to a libretto by Giovanni Ruffini and Donizetti after Angelo Anelli, premiered in Paris at the ThÃ©Ã¢tre Italien on 3 January 1843. The incredible success of the opera led to a series of performances the same year, in Milan (17 April), Vienna (14 May), and London (19 June).

"Don Pasquale was an instant success ... For its Viennese premiÃ¨re, at the KÃ¤rntnertortheater on 14 May 1843 in Italian (a production prepared by Donizetti), he added to the score the baritone-buffo duet 'Cheti, cheti, immantinente', borrowing it from a discarded section of the unperformed L'ange de Nisida; Don Pasquale was sung on that occasion by Tadolini (Norina), Rovere (Pasquale), Salvi (Ernesto) and Ronconi (Malatesta) ...

" ... [The opera] has been described as 'Mozartian', and clearly it shares certain characteristics with Mozart's approach: the characters are humanized, not mere farcical stereotypes, and the melodies mirror the emotions they express. This comparison is often made in apparent astonishment that a Donizetti could achieve such an irresistibly heartfelt comedy. Rather, it is more appropriate to describe the opera as supremely 'Donizettian', for it stands as a summation of all his most valuable qualities." William Ashbrook in Grove Dictionary of Opera. (Inventory #: 33507)
$715.00 add to cart or Buy Direct from
J. & J. Lubrano Music Antiquarians
Share this item