[LAW] [AMERICANA] COMMENTARIES ON THE LAWS OF ENGLAND. BOOK THE FOURTH. (VOLUME 4, ONLY) 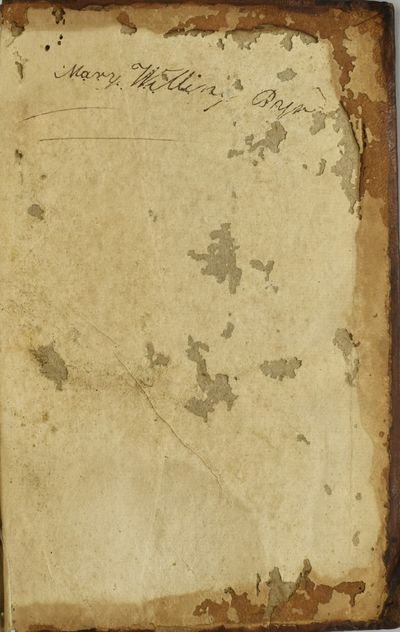 by Sir William Blackstone, Knt.| [Mary Willing Byrd] [Byrd Family]
Philadelphia: Printed for the Subscribers by Robert Bell, 1772. Full Leather. Good binding. William Byrd of Westover built one of the largest libraries in the colonies. He and his first wife, Lucy Parke, had a tumultuous relationship, and quarreled often. He tried (in vain) to keep her out the library -- during one of their many fights she hurled a book at him. His second wife, Mary Willing Byrd, must not have been a stranger to his library either. Mary Willing Byrd's signature is on the pastedown. Also are the signatures of two of William Byrd III sons -- Wm. P[owell] Byrd on the endpaper and Otway Byrd at the top of the first page of Subscribers.~It is noted in Printing and the Mind of Man that "[u]ntil the Commentaries, the ordinary Englishman had viewed the law as a vast, unintelligible and unfriendly machine; nothing but trouble, even danger, was to be expected from contact with it. Blackstone's great achievement was to popularize the law ... The law might be as much an ass after Blackstone as before, but it was a familiar ass." [PMM, 212]. Surely the same could be said of Blackstone's influences on the colonies of America, perhaps with greater impact. The influence apparently extended to women as well as to "gentlemen". Printed on the eve of the American Revolution, one wonders how many women in the colonies would have put their signature in Blackstone's Commentaries.~Book the Fourth only of the First American Edition of Blackstone's Commentaries, with (according to OCLC) an erroneous date on the title page of DCCLXXII. In contemporary calf, with loss at the spine. The front joint is cracked by holding well. Morocco title label is chipped. There is silverfishing to the pastedown and the edges of the first several leaves. With a tipped in advertisement. (Evans 11996; Grolier English 100, 52; PMM 212). Good binding. (Inventory #: 292816)
$1,250.00 add to cart or Buy Direct from
Black Swan Books
Share this item

CATALOG OF THE FIRST EXHIBITION OF VIRGINIA ARTISTS. SPONSORED BY THE RICHMOND ACADEMY OF ARTS. APRIL 17 TO MAY 2

Richmond, Virginia : A. A. Anderson Gallery of Art , 1932
(click for more details about CATALOG OF THE FIRST EXHIBITION OF VIRGINIA ARTISTS. SPONSORED BY THE RICHMOND ACADEMY OF ARTS. APRIL 17 TO MAY 2)

THE JEWELER'S DIRECTORY OF GEMSTONES. A COMPLETE GUIDE TO APPRAISING AND USING PRECIOUS STONES, FROM CUT AND COLOR TO SHAPE AND SETTING

Norwalk, Conneecticut : The Easton Press , 2012
(click for more details about THE JEWELER'S DIRECTORY OF GEMSTONES. A COMPLETE GUIDE TO APPRAISING AND USING PRECIOUS STONES, FROM CUT AND COLOR TO SHAPE AND SETTING)
View all from this seller>