BUILDING A HOUSE IN SWEDEN 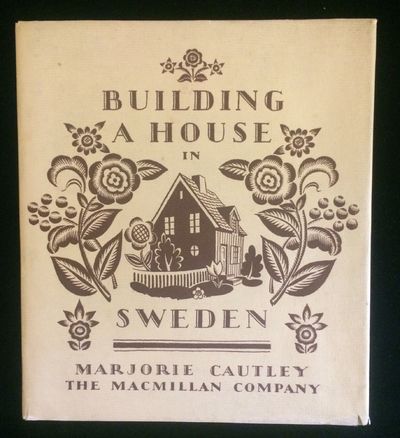 by Cautley, Marjorie. Sewell, Helen (illustrations by)
NY: The Macmillan Company, 1931. 1st Edition. Hardcover. Near Fine/Near Fine. Uncommon children's story about residential architecture and building in Sweden by famous American landscape architect Marjorie Sewell Cautley (1891 - 1954) and illustrated by her sister Helen Sewell (1896 -1957). The book apparently emerged from the travels of the young architect in Sweden after graduating from architecture school. Sewell's career was just getting started too, as this was one of her earliest illustrated books. Cautley played an influential yet often overlooked part in the conception and development of planned communities, which her experience in Sweden likely informed. In 1955, Sewell won a Caldecott Medal as illustrator of The Thanksgiving Story by Alice Dalgliesh and previously had illustrated several novels that were runners-up for the Newbery Medal. Seldom seen on the rare book market, OCLC lists 27 copies worldwide. The endpapers are a little browned from age and the top edge a little dusty, and the spine and dustjacket folds tanned, otherwise an apparently unused copy, no names, inscriptions or bookplates. (Inventory #: 012118)
$475.00 add to cart or Buy Direct from
Johnnycake Books
Share this item

A Journey through Albania, and Other Provinces of Turkey in Europe and Asia, to Constantinople, during the Years 1809 and 1810. (Plate volume only)

Philadelphia : M. Carey and Son , 1817
(click for more details about A Journey through Albania, and Other Provinces of Turkey in Europe and Asia, to Constantinople, during the Years 1809 and 1810. (Plate volume only))

NY : Wm. Radde , 1846
(click for more details about THE HOMOEPATHIC DOMESTIC PHYSICIAN)
View all from this seller>