Islands In The Stream. 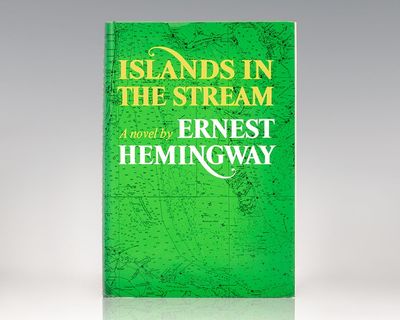 by Hemingway, Ernest
New York: Charles Scribner's Sons, 1970. First edition of Hemingway's autobiographical novel in three parts, published posthumously. Octavo, original green cloth, cartographic endpapers. Fine in a near fine dust jacket. Jacket design by Paul Bacon. An exceptional example. Islands in the Stream was the first of the posthumously published works of Ernest Hemingway. It was originally intended to revive Hemingway's reputation after the negative reviews of Across the River and Into the Trees. He began writing it in 1950 and advanced greatly through 1951. The work, rough but seemingly finished, was found by Mary Hemingway among 332 works Hemingway left behind at his death. Islands in the Stream was meant to encompass three stories to illustrate different stages in the life of its main character, Thomas Hudson. It was made into the 1977 film was directed by Franklin J. Schaffner and starred George C. Scott, Hart Bochner, Claire Bloom, Gilbert Roland, and David Hemmings. (Inventory #: 89058)
$375.00 add to cart or Buy Direct from
Raptis Rare Books
Share this item