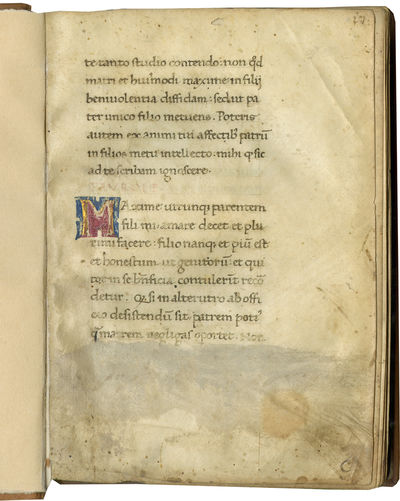 by Pseudo-Phalaris; Francesco Griffolini
RENAISSANCE MANUSCRIPT OF THE FICTIONAL LETTERS BY SICILIAN TYRANT, PHALARIS. In Latin, decorated manuscript on parchment, Italy (Northern?), c. 1460-1480. Dimensions 164 x 113 mm., 80 folios, lacking 40 leaves, horizontal catchwords, written in a fine humanistic minuscule, addressees of letters in red capitals, letter numbers in red in the margins, each letter begins with a very fine 2-line initial in burnished gold on a ground painted in red and blue, highlighted with white penwork. BINDING: modern light brown calf. TEXT: The Italian humanists were fascinated by this collection of fictional letters purporting to be by the monstrous Sicilian tyrant, Phalaris, famous for torturing his enemies inside a bronze bull and eating human babies. In keeping with the established tradition in Ancient Greece of epistolary fiction, these letters are a literary creation by a yet unknown author, who reinvented Phalaris and explored his public and private life through the fictional letters. Still lacking a modern critical edition of the original Greek, or this Latin translation, this text is rare on the market. PROVENANCE: The style of the script and initials suggests that the manuscript was made in Italy in the second half of the fifteenth century, c. 1460-1480, perhaps in Northern Italy; evidence of erasure in the lower margin of the first and last leaves (ff. 17, 104v): probably deletion of eighteenth- or nineteenth-century ownership inscriptions, now illegible. CONDITION: f. 1 darkened and stained, further stains and signs of use in the lower margins at the beginning and the end, edges darkened, spine almost entirely detached, slightly scratched on the back board, but in overall good condition. Full description and images available. (TM 1081) (Inventory #: TM 1081)
$45,000.00 add to cart Available from
Les Enluminures, Ltd.
Share this item
Les Enluminures, Ltd.
Offered by

Book of Hours (Geert Grote translation, use of Utrecht); in Dutch, illuminated manuscript on parchment, by the Master(s) of Dirc van Delft Group

Northern Netherlands (Utrecht), c. 1410-1420
(click for more details about Book of Hours (Geert Grote translation, use of Utrecht); in Dutch, illuminated manuscript on parchment, by the Master(s) of Dirc van Delft Group)

by Nicholas of Lyra