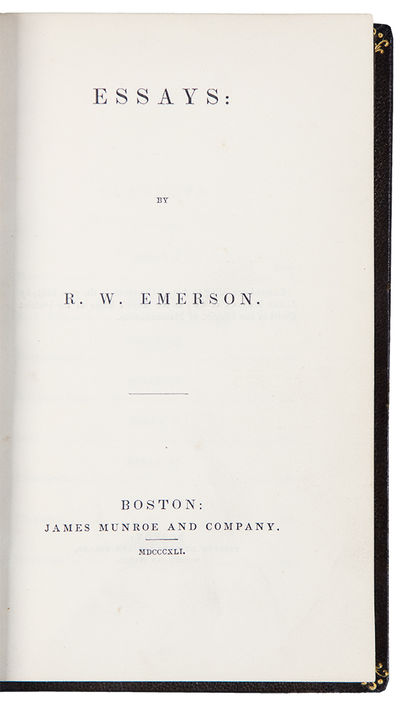 First edition of this series of Emerson's most famous essays on transcendentalism, with the scarce original cloth preserved.

This first series contains 12 essays: History, Self-Reliance, Compensation, Spiritual Laws, Love, Friendship, Prudence, Heroism, The Over-Soul, Circles, Intellect, Art. It was Emerson's first full-length work and solidified his status as a serious philosopher. "Self-Reliance" is his most famous and influential work, in which Emerson emphasizes, above all, faith in the individual and their connection to nature: "Trust thyself: every heart vibrates to that iron string." "Timeless, and without a trace of 'dating,' these essays are as readable, and to a considerable extent as much read, today as a hundred years ago. Their ethical inspiration and stimulation, their occasional startling phrase, their individualistic idealism, which stirred renascent Yankee New England to its depths, speaks with the same simple power and force in the midst of modern complexities" (Grolier, 100 Influential American Books 47).

Osceola of Florida. Drawn on Stone by Geo. Catlin from His Original Portrait

New York : George Catlin , 1838
(click for more details about Osceola of Florida. Drawn on Stone by Geo. Catlin from His Original Portrait)

A View of Manchester N.H. Composed from Sketches taken near Rock Raymond by J. B. Bachelder, 1855