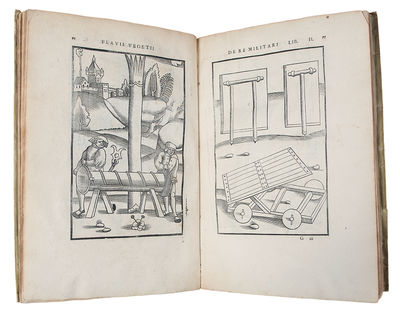 by VEGETIUS, Flavius Renatus
Paris: Sub scuto Basiliensi ex officina Christiani Wecheli, 1535. Folio. (13 x 8 5/8 inches). [8], 279, [1]pp. With 122 full-page woodcuts (including one repeated twice), one half-page woodcut and typographical diagrams. Wechels woodcut device on title-page and final page. Contemporary limp vellum, red morocco label on spine. Vegetius' famous manual on warfare, edited by the great sixteenth-century French humanist scholar Guillaume Budé. The four works from ancient Rome on military matters that the text includes are somewhat unrelated to the full-page woodcuts (e.g. the depiction of firearms), which come from Konrad Kyesers' "Bellifortis," a manuscript completed in 1405 regarded as the beginning of technological writing in the West, which contains full-page illustrations of military devices. It was often copied in later manuscripts throughout the fifteenth century but never appeared in print (until the facsimile edition was published in 1967). More than 100 woodcuts from "Bellifortis" were printed in eight editions of Vegetius' book published between 1511 and 1555, of which the present is the seventh chronologically. These illustrations were twice recut during this period, those in the four editions by Wechel, as here, being more finely done. The topics discussed include how to set up and fortify a camp, training and disciplining soldiers, how to march, warfare tactics and strategies in battle, and qualities of leadership. The Roman texts were the only printed Western works on military tactics and maneuvers available at the time, and those, together with the fine woodcuts, make up a very nice and more complete work on practical military matters. This work is widely recognized as the best Renaissance edition of the ancient military texts of Vegetius, Frontinus, Aelius Tacitus and Modestus and the quintessential illustrated military work of the sixteenth century. Phillips, Diving, pp. 76-83 and 831; Adams V-332; Cockle 17; Mortimer, French, 487; Riccardi II, 580. (Inventory #: 39478)
$6,000.00 add to cart or Buy Direct from
Donald A. Heald Rare Books
Share this item
Donald A. Heald Rare Books
Offered by