Central Route to the Pacific, from the Valley of the Mississippi to California: Journal of the Expedition of E.F. Beale, Superintendent of Indian Affairs in California, and Gwinn Harris Heap, from Missouri to California, in 1853 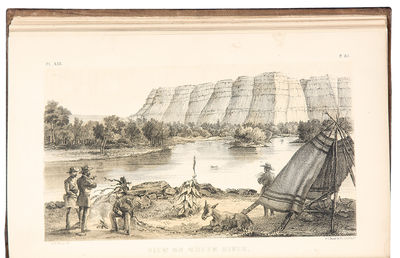 One of the first detailed accounts of the central route from Missouri to the Pacific, complete with the elusive map.

E.F. Beale and Gwinn Heap were greatly influenced by Senator Benton in their choice of a route across Colorado and Nevada. The party travelled from Westport (Kansas City) southwest on the Santa Fe trail to Bent's Fort, then to the short-lived Fort Massachusetts, the Rio Grande Valley, the Grand River, and then to the Uncompahgre. They returned to Taos for supplies, and then continued southwest via Utah to California. The map, which is present here, was issued with only a few copies. Wheat lauds the map and spends several pages discussing the journey, saying that it has received less attention than it deserves. He notes that it is the earliest published map to show the middle Rocky Mountain region, through what is now southern Colorado, the first to depict several streams and rivers, and the first attempt to chart a route through Death Valley. This book is one of the first detailed examinations of the "Central Route" from Missouri to the Pacific, and a basic piece of Western Americana.

Paris, Coblentz and London 1842
(click for more details about Camp of the Gros Ventres of the Prairies on the Upper Missouri)
View all from this seller>