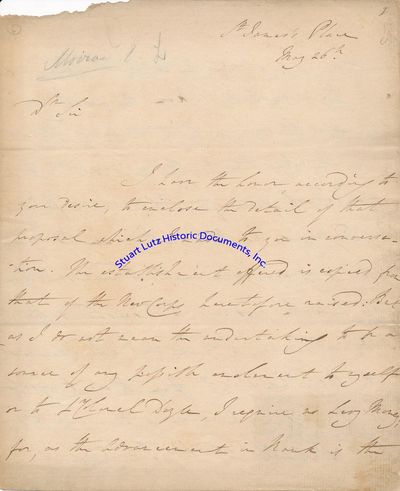 signed
by FRANCIS RAWDON-HASTINGS
FRANCIS RAWDON-HASTINGS, 1ST MARQUESS OF HASTINGS (1754-1826). Rawdon-Hastings was an Irish nobleman, politician, and Army officer. ALS. 8pgs. May 26th [no year]. St. James’s Place. An autograph letter signed “Rawdon”. It concerns Rawdon’s work in establishing new Army regiments. “Dr Sir I have the honor according to your desire, to enclose the detail of that proposal which I made to you in conversation. The establishment offered is copied from that of the New Corps heretofore raised; But as I do not mean the undertaking to be a source of any proper endorsement to myself or to Lt Colonel Doyle, I require no Levy-Money; for, as the advancement in Bank is the condition upon which the several officers furnish their quotas of Men, the Levy-Money is little else than a gratuity to the person who raises the Regiment. The proposal is to be subjected to such forfeitures, upon failure of producing the Men within limited time, as you may see expedient to impose. You will have the goodness to understand, that I do not mean to have any other connection with this Regiment than to exert myself for its rapid completion & to answer to you that it shall not be a Job…The private advantage I should have in it, would be the recommendation of my Brother for the Lieutenant-Colonelcy: But as he is not a young Major, & as he served the last War in America, a promotion that went hand in hand with an object of public utility could scarcely be held objectionable…I must, indeed, intreat you to mention the Certificate to Lt. Col. Doyle; who, having previous to the General Order from the War Office offered to his Colonel to embark instantly, is honorably jealous of any attempt to delay what he think under every circumstance of health incur but upon him…I have the Honor to be Dr Sir Your most obedt & very humble Serv Rawdon”. The letter probably dates to before the early 1790s, when Rawdon took on the additional surname Hastings. A complete transcript accompanies the letter. It is in very good condition. (Inventory #: 5185)
$250.00 add to cart Available from
Stuart Lutz, Historic Documents, Inc.
Share this item

by LYNDON B. JOHNSON

by KING FREDERICK OF DENMARK