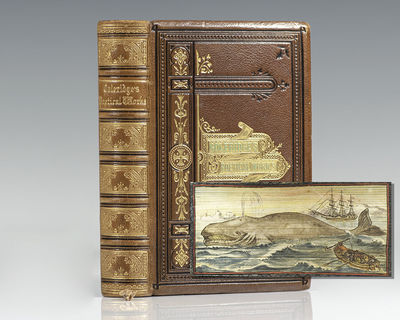 by Coleridge, Samuel Taylor
Edinburgh and London: Gall & Inglis, nd. inely bound example of Coleridge's poetical works, including The Rime of the Ancient Mariner and with an elaborate fore-edge painting of a scene from the poem. Octavo, elaborately bound in full morocco with gilt titles and tooling to the spine in six compartments within raised bands, gilt titles and decorations to the front panel, all edges gilt, ribbon bound in. Illustrated with six steel engravings. With a fore-edge painting illustrating a dramatic scene from Coleridge's The Rime of the Ancient Mariner. In very good condition. Embossed library stamp. The first known example of a disappearing fore-edge painting (where the painting is not visible when the book is closed) dates back to 1649. Around 1750, the subject matter of fore-edge paintings changed from simply decorative or heraldic designs to landscapes, portraits and religious scenes, usually painted in full color. The technique was popularized in the 18th century by John Brindley (1732-1756), publisher and bookbinder to the Prince of Wales and Edwards of Halifax, a distinguished family of bookbinders and booksellers. The majority of extant examples of fore-edge paintings date to the late 19th and early 20th century and were painted on reproductions of books originally published in the early 19th century, including the present volume. (Inventory #: 119363)
$1,400.00 add to cart or Buy Direct from
Raptis Rare Books
Share this item