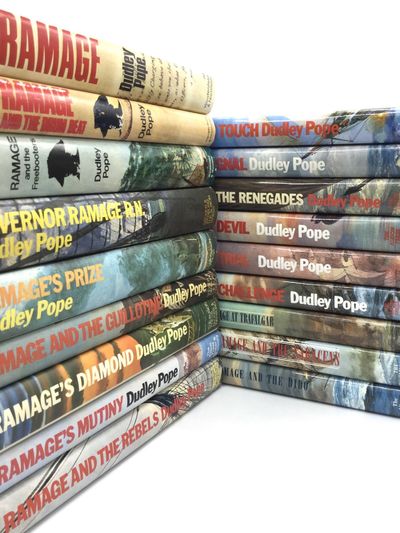 by Pope, Dudley
London: Weidenfeld & Nicholson and Secker & Warburg, 1965. First Edition. Hardcover. Near fine/Near fine. First edition, first printings (1965-89). The acclaimed series of historical novels featuring Nicholas Ramage, an officer in the Royal Navy during the Napoleonic Wars. He is a contemporary of Horatio Hornblower, but unlike the C.S. Forester character, who never fought in a large fleet battle, Ramage participated in both the Battle of Cape St. Vincent and the Battle of Trafalgar. Octavo, eighteen volumes: Ramage, Ramage and the Drum Beat, Ramage and the Freebooters, Governor Ramage R.N., Ramage's Prize, Ramage and the Guillotine, Ramage's Diamond, Ramage's Mutiny, Ramage and the Rebels, The Ramage Touch, Ramage's Signal, Ramage and the Renegades, Ramage's Devil, Ramage's Trial, Ramage's Challenge, Ramage at Trafalgar, Ramage and the Saracens, [and] Ramage and the Dido. Ramage's Devil is a Secker & Warburg file copy, with the publisher's ink stamp to the front flyleaf. Light soiling along the edges of a handful of volumes, with some very mild edgewear to a few of the dust jackets. Drum Beat and Prize are price-clipped. Most are fine or nearly so in like dust jackets. (Inventory #: 72388)
$750.00 add to cart Available from Johnson
Share this item

London : Edward Arnold & Co , 1935
(click for more details about JAPANESE BUDDHISM)
View all from this seller>