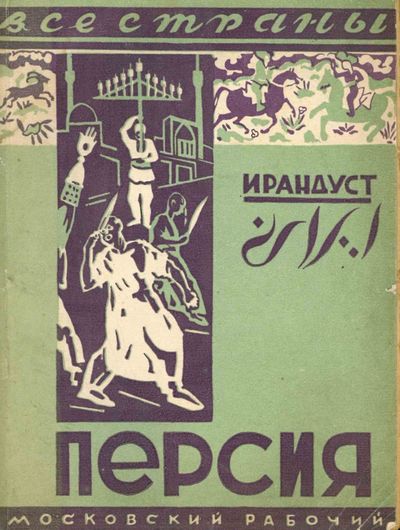 by Irandust (pseudonym of Osetrov, Vladimir Petrovich)
Moscow-Leningrad: Moskovskii rabochii, [1928]. Octavo (18 × 13 cm). Original pictorial wrappers; 186, [1] pp. Illustrations throughout, including two maps. Private ownership stamp and inscription in Russian to title; else good or better. Second edition of a historical and cultural overview of Iran, which provides the Soviet take on the contemporary politics of the Middle East in the 1920s. Written by Soviet diplomat and historian Vladimir Osetrov (pseud. Irandust; 1893-1938) who worked for the Soviet Ministry of Foreign Affairs (NKID) in 1919-1938. A graduate of the Law Faculty of Moscow University, in 1920-1925 and 1928-1929 Osetrov worked in Iran. In this post he wrote numerous articles on the history and political economy of the region, focusing especially on agriculture and trade. In 1938 he was arrested, accused of espionage and executed. He was rehabilitated in 1956. His other works include "The driving forces of the Kemalist Revolution" (1928) and "Persia at a crossroads" (1930).