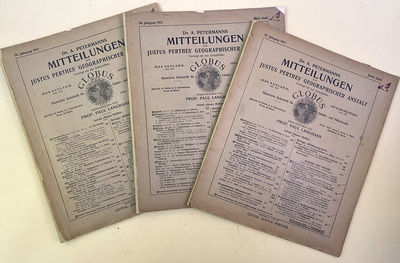 by Wegener, Alfred
1912. Continental Drift
Wegener, Alfred (1880-1930). Die Entstehung der Kontinente. In: Dr. A. Petermanns Mitteilung aus Justus Perthes' geographischer Anstalt 58 (1912): 185-195; 253-256; 305-309. Together three numbers. 280 x 231 mm. Original brown printed wrappers, spines restored, minor chipping. Occasional foxing, but very good to fine. Preserved in a cloth drop-back box.
First Edition. Wegener originated the theory of continental drift in this paper on the origin of continents, which he conceived after being struck by the apparent correspondence in the shapes of the coastlines on the west and east sides of the Atlantic, and supported with extensive research on the geological and paleontological correspondences between the two sides. He postulated that 200 million years ago there existed a supercontinent ("Pangaea"), which began to break up during the Mesozoic era due to the cumulative effects of the "Eötvös force," which drives continents towards the equator, and the tidal attraction of the sun and moon, which drags the earth's crust westward with respect to its interior. Wegener's theory attracted little interest until 1919, when he published the second edition of his treatise Die Entstehung der Kontinente und Ozeane. Between 1919 and 1928 continental drift was the focus of much controversy and debate. Later the theory fell into obscurity because Wegener's drift mechanism was shown to be untenable. Wegener died at the early age of 50 on an arctic expedition at Eismitte in Greenland.
With the discovery of new paleomagnetic evidence in the 1950s, and especially with the discovery of plate tectonics in the 1960s, Wegener's theory of continental drift eventually became widely accepted. Wegener's paper is rare and very difficult to find in the original three separate journal issues in their original printed wrappers. Norman 2192. Dictionary of Scientific Biography. (Inventory #: 41526)
$3,750.00 add to cart or Buy Direct from
Jeremy Norman & Co.
Share this item
Jeremy Norman & Co., Inc.
Offered by