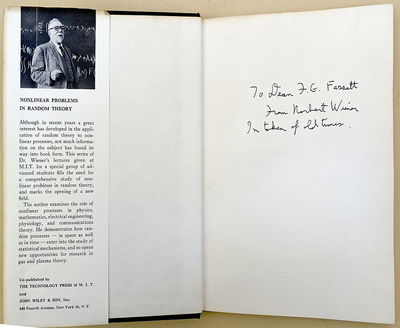 by Wiener, Norbert
New York: MIT & Wiley, 1958. Wiener, Norbert (1894-1964). Nonlinear problems in random theory. ix, 131pp. Text diagrams. Cambridge: Technology Press of the Massachusetts Institute of Technology; New York: John Wiley & Son, 1958. 228 x 147 mm. Original cloth, printed dust-jacket (lightly worn). Fine copy, inscribed by Wiener to Frederick G. Fassett, Jr. (1901-91) on the front endpaper: "To Dean F. G. Fassett from Norbert Wiener in token of old times."
First Edition of the first book on the mathematical analysis of nonlinear random processes, a work that arose from Wiener's pioneering analyses of brain waves performed in the early 1950s. The story of the book's genesis is an amusing one. Amar Bose, founder and chairman of the Bose Corporation, was a doctoral student at MIT at the time, and Wiener asked Bose to work with him on the nonlinear random processes project.
"He wrote it over two or three years on my blackboard every day," Bose recalled. "He would go along with the chalk in one hand and the eraser in the other. He would write and erase as he went, working out all the equations in his head. He never put two lines on the blackboard. Then one day he came in and put the last result down and said, 'Okay Bose, that's it! Write it up!'" Bose was dumbfounded. "I said, 'What do you mean, write it up? There's one line on the blackboard. You erased everything'" (Conway & Siegelman, p. 285).
With the help of Y. W. Lee, the senior figure in MIT's electrical engineering department, Bose was able to persuade Wiener to reconstruct his new mathematics in a series of lectures given before a special group of advanced students. Bose and Lee photographed and recorded Wiener's lectures, transcribing and correcting them for publication in book form. The book was published simultaneously in the United States and England.
Wiener presented this copy of the book to Frederick Gardiner Fassett, Jr., director of publications and of the Technology Press at MIT. Fassett served as MIT's associate dean of students from 1952 to 1966. Conway & Siegelman, Dark Hero of the Information Age: In Search of Norbert Wiener, pp. 285-86. 36823 . (Inventory #: 36823)
$950.00 add to cart or Buy Direct from
Jeremy Norman & Co.
Share this item
Jeremy Norman & Co., Inc.
Offered by