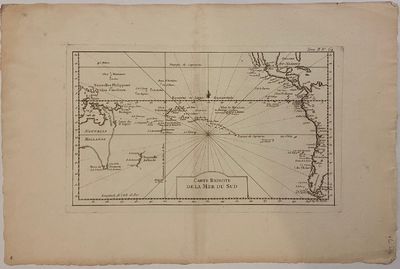 by BELLIN, Jacques Nicolas
Paris, 1764. Map. Copper engraving with hand coloring. Image measures 8 1/4" x 14". Sheet measures 13 3/4" x 20 3/4". This map of the Pacific Ocean shows the region extending from Australia to the western coast of the Americas. Bellin's depiction of Australia, labeled 'Nouvelle Hollande', shows the continent, Papua New Guinea, and Terre de Diemen, or Tasmania, conjoined as one land mass. Bellin makes evident in his rendering of the coastline that much of the eastern coast of Australia is unknown. Only the western coast of New Zealand is drawn. The map was published in Bellin's "Petit Atlas Maritime," which covered the coasts and important port cities of the known world. This map is in excellent condition with no chips or tears. Minor toning to centerfold.Jacques Nicolas Bellin (1703-1772) was the official hydrographer to the French king and the first person to hold the title of "IngÃ©nieur de la Marine of the Depot des cartes et plans de la Marine" (chief engineer of the French Hydrographical Office). He was particularly well known for his maps of the French Empire, especially the territories in North America. This map is a fine example of his detailed work. (Inventory #: 298263)
$250.00 add to cart or Buy Direct from
Argosy Book Store
Share this item