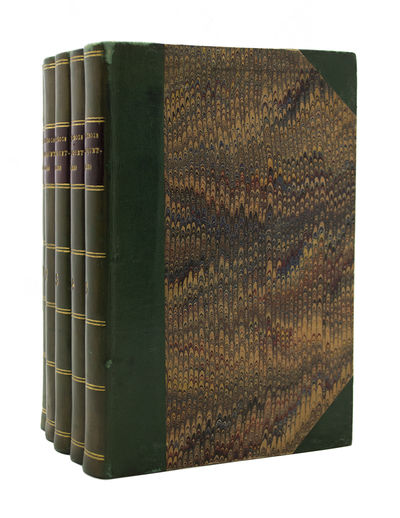 Uniformly bound in 19th-century half green calf over marbled boards. Spines stamped and lettered in gilt Red Morocco spine labels, lettered in gilt. All edges sprinkled red. Tops of spines with some very minor rubbing. A feint damp stain to top of spine of volume I. Text is fine and seems almost unread. Overall a beautiful, about fine copy of this set.

Les Trois Mousquetaires , was originally published as a serial novel, appearing one chapter at a time in the Parisian newspaper Le Siècle from March 14, 1844 to July 1, 1844. It was originally advertised as "Athos, Porthos and Aramis," but upon it's first appearance in Le Siècle it was given the title Les Trois Mousquetaires . The story was extremely popular and immediately various Belgian publishers raced to print and distribute copies which were small and inexpensive.

Dumas bibliographer Frank Wild notes "Issue by issue of Le Siècle was hastily acquired by the piratical publishers of Brussels, and as quickly the portion of Les Trois Mousquetaires which it contained was set up by them in type; then, as sufficient to form a volume accumulated, this was given to the public. Though these copies were `interdicted for France,' being small and unobtrusive many found their way across the frontiers." (The Colophon New Series, Vol. III, No. 3, Summer 1938 ("Dumas Revises `The Three Musketeers'").

It has been universally determined that these Belgian editions indeed came before the official Paris Baudry edition which was also published in 1844. Reasoning behind this is that this title is the only know instance within his romances where Dumas, after the publication in Le Siécle, asked to proof-read Les Trois Mousquetaires , and decided to make minor revisions.Additionally, Dumas opened up bidding for the publishing rights in Paris and ultimately Baudry was the high bidder and won the rights. All these textual changes that were made as well as the time it took for the French publishers to bid on the story speaks to the length of time it took to produce the official first edition. Another interesting thing to note is that because the Belgian editions took the text straight from the serial, these editions are the only ones which contain Dumas original, unrevised story.

" Frank Reed extensively analyzes the differences between the Belgium editions and those of Baudry and Calmann Lévy, who reprinted the Baudry text, and notes that most of the early translations were made from the Belgium editions, which were considerably less expensive than the authorized French edition. He also notes that, in many instances, Dumas' revisions were not necessarily improvements on the original. Given the time frame, the fairly extensive revising of the Baudry text by Dumas seems inevitably to have caused a delay in publication not encountered by the hasty Belgium publishers." (PBA Galleries)

Vampire; or the Bride of the Isles A Romantic Melo-drama, in Two Acts: Preceded by an Introductory Vision. As Performed at the Theatre Royal English Opera House, August 9th, 1820.

London : Printed for John Lowndes , 1820
(click for more details about Vampire; or the Bride of the Isles A Romantic Melo-drama, in Two Acts: Preceded by an Introductory Vision. As Performed at the Theatre Royal English Opera House, August 9th, 1820.)

Tale of a Tub Written for the universal improvement of mankind. To which is added, An Account of a Battel between the Antient and Modern Books in St. James's Library.

London : Printed for John Nutt , 1704
(click for more details about Tale of a Tub Written for the universal improvement of mankind. To which is added, An Account of a Battel between the Antient and Modern Books in St. James's Library.)
View all from this seller>