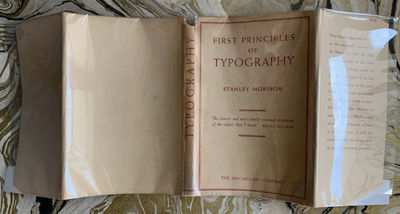 by Stanley Morison (1889-1967)
New York, NY: Macmillan, 1936. First Edition. Hardcover. Very Good/Very Good. FIRST AUTHORIZED SEPARATE EDITION. 12mo. 6 3/4 x 4 3/8 inches. (vi), 29, [1 blank] pp. Text clean, unmarked. Beige cloth, red titling on spine and front cover, dust-jacket in archival mylar; binding square and tight, jacket with a bit missing from head of spine, top edge a bit dust-soiled, some offsetting to end-papers. Very Good. "Contains a short preface by Morison stating that the text is identical to the original printing [no. 98] except for a few lines. [T]he original dust wrapper printed in red, including the quotation 'The clearest and most closely-reasoned exposition of the subject that I know' [Bruce Rogers]. There was a special issue of this edition, 29 numbered copies only, printed in April 1936 at the Printing Office of the Yale University Press by George T. Bailey, as Keepsake Number 6 for the Columbiad Club of Connecticut." Appleton. This copy printed by the Printing-Office of the Yale University Press, but not one of the special copies. REFERENCE: Appleton, The Writings of Stanley Morison, No. 98b. (Inventory #: HL1218-016)
$60.00 add to cart Available from
John Howell for Books
Share this item

Milwaukee, WI : The ABCdarium , 1991
(click for more details about Reflections on Mortality in Prose and Poetry)

Milwaukee, WI : ABCDarium of Clifford L. Helbert , 1987
(click for more details about Ecce Littera, Vol. 1)
View all from this seller>