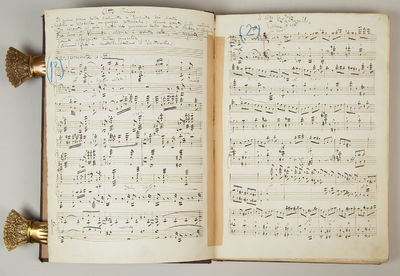 An autograph fair copy, signed on final page "Aless. Bustini" and dated Rome, July 30, 1901. With additional autograph markings by the composer in black ink clarifying text and other instructions and occasional markings in an unidentified hand in blue and lead pencil indicating voice types and cuts.

With an autograph inscription to title"A Mario Roux questa mia povera opera semi-fischiata, in attera di mi altra due lo sara completamente, con grande affetto" [For Mario Roux, this poor opera of mine, waiting for my two others to be completed, with great affection], signed "Aless. Bustini" and dated Rome, May 1[?2], 1902.

Maria Dulcis, a melodramma in 3 acts to a libretto by Eugenio Checchi (based on Vincenza, a short story in Berlioz's les Soirées de l'orchestra), premiered in Rome at the Teatro Costanzi on 14 April 1902 with cast including Lina Pasini-Vitale, Angelo Marcolin, and Rodolfo Angelini-Fornari, conducted by Edoardo Vitale.

Bustini studied at the Accademia di Santa Cecilia in Rome with Sgambati (piano), Renzi (organ), and Falchi (composition), graduating in 1897. He was subsequently appointed to its faculty, and was its president from 1952 to 1964.