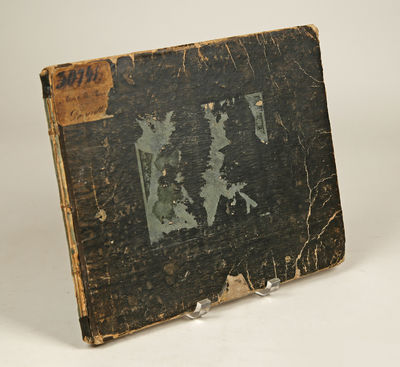 Some early notational additions in pencil to the vocal lines in the sixth number, the duet "Oude riedi? che mai brami?"

From the collection of Luigi Ricci (1893-1981), Italian conductor, vocal coach, and close associate of Puccini and Mascagni.

Maria de Rudenz, a dramma tragico in 3 acts to a libretto by Salvadore Cammarano after A. Bourgeois, J.-G.-A. Cuvelier, and J. de Mallian, premiered in Venice at the Teatro La Fenice on 30 January 1838.

"With its highly romantic plot, unusual in involving a heroine who apparently dies twice, Maria de Rudenz marks the extreme of Donizetti's interest in 'strong' subjects. It has often been remarked that the libretto's violent plot, and its reliance on past events to move the action on, is more than a little reminiscent of Cammarano's later Il trovatore. The score contains much fine music, including a mellifluous sortita for the baritone, a notable Larghetto to the Act 1 finale (later incorporated into Poliuto and Les martyrs), several powerful duets with contrasting melodies for the participants (particularly effective is the one for Maria and Corrado in Act 2), a moving aria-finale for the heroine and, extraordinarily, in the prelude to Act 2, an extended solo for bass clarinet." William Ashbrook in Grove Music Online. (Inventory #: 33576)
$345.00 add to cart or Buy Direct from
J & J Lubrano Music Antiquarians
Share this item