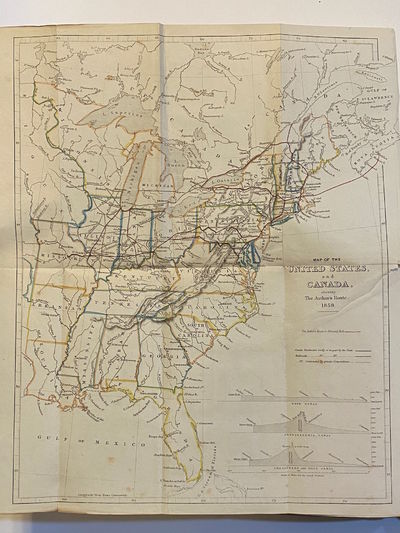 by Trotter, Isabella S.
London: Longman (et al.), 1859. First Edition. Very good. 8vo. xii, 308 pp. With folding map of the eastern U.S. and Canada with original outline coloring and author's route in red. Later 3/4 black roan over dark green boards (edges somewhat worn). Map neatly repaired; on title the author's name written in MS and subsequently erased (sic). Bound without the advertisements. "Penetrated West to Missouri, and liked it all." (Howes, U.S.-iana T358). "Mrs Trotter did not go south of the Potomac, but she did tour Kentucky and visit Louisville, Frankfort, and Lexington [...] she made a favorable comparison between the Bluegrass area and the English countryside." (Clark, Old South III, 501).

The work is comprised of thirteen letters from Mrs. Trotter to her daughter, in which are described the author's arrival at New York, the burning of quarantine buildings, Newport, Boston, Niagra Falls, Toronto, Quebec, Yale University, Philadelphia, Baltimore, B&O Railway, Columbus, Cincinnati, St. Louis, Chicago, and back to New York where she describes the Astor Library and Cooper Institute.

Computer Art and Human Response. [Together with]: The Long Ride

Charlottesville, Virginia : Paul B. Victorius , 1968
(click for more details about Computer Art and Human Response. [Together with]: The Long Ride)

[HAWAII 1822]. Instructions to the Missionaries about to Embark for the Sandwich Islands; and to the Rev. Messrs. William Goodell, & Isaac Bird, Attached to the Palestine Mission

by American Board of Commissioners for Foreign Missions

Boston : Crocker and Brewster , 1823
(click for more details about [HAWAII 1822]. Instructions to the Missionaries about to Embark for the Sandwich Islands; and to the Rev. Messrs. William Goodell, & Isaac Bird, Attached to the Palestine Mission)
View all from this seller>